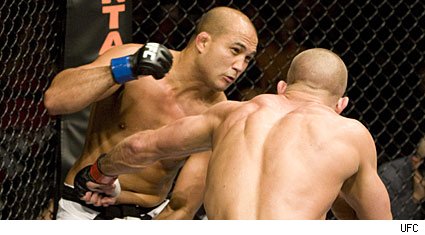 UFC lightweight champion BJ Penn was soundly defeated by Georges St. Pierre at UFC 94, and then spent time filing a lengthy appeal that went nowhere, but it seems that Penn is finally looking ahead instead of backward.

A full three months before his UFC 101 main-event matchup against Kenny Florian, Penn is in San Clemente, Calif., training with Marv Marinovich at Sport Science Lab, according to a video he posted on his site, BJPenn.com.

Marinovich is a trainer who specializes in speed, power and functional training. He is also well known as the controversial father of ex-USC and Oakland Raiders quarterback Todd Marinovich, a one-time prodigy who saw his NFL dreams fall prey to substance-abuse issues.

In a 1988 Sports Illustrated story, Marinovich was described as raising "America's first test-tube athlete" for the unique upbringing of his son, Todd, who it was claimed in the article started his athletic conditioning at one month old. Todd Marinovich became a first-round NFL draft pick but flamed out due to personal issues. Marv Marinovich has gone on to become a respected trainer, working with among others Pittsburgh Steelers' All-Pro defensive back Troy Polamalu.

Penn and Florian were originally expected to meet on June's UFC 99 card, but that plan was scrapped when Penn asked for more time, and the matchup was moved to UFC 101, which will take place in Philadelphia on August 8.

Penn will eventually return to Hawaii for his full training camp, while Florian has countered by doing some training with St. Pierre before returning to Massachusetts to prepare with regular trainer Mark DellaGrotte.

Florian has won six straight fights, most recently defeating Joe Stevenson with a first-round rear naked choke at UFC 91, while Penn had won three straight lightweight fights before moving up to face GSP in January.