Going Gets Tough for Yushin Okami 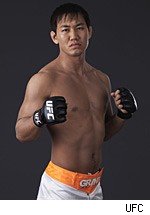 Yushin Okami is often viewed as the forgotten man in the UFC's middleweight division. Some -- including myself -- have him listed as the second-best 185-pound fighter in the world, yet his name is hardly mentioned when discussing future challengers for the current middleweight champion, Anderson Silva.

Well, after learning that Okami has pulled out of his upcoming UFC 98 fight against Dan Miller due to a torn knee ligament, I am officially denouncing him as my No. 1 contender in the UFC's middleweight division. Harsh, perhaps, but at this point, it needs to be done.

Look, I know injuries are a big part of the fight game. Everyone suffers from them at least once in their career. However, another part of the game is taking care of your body and not getting injured. This is the second time in less than a year that an injury has threw a wrench into Okami's plans to fight for the title.

Last summer, Okami was rumored to be facing Silva for the title at UFC 90. Finally, we thought, both men would get it on for the first time since Okami defeated Silva via disqualification in a controversial 2006 bout in Hawaii. However, Okami broke his hand in July and was forced to withdraw from the bout. Instead, Patrick Cote replaced him against Silva and we all know how miserably that turned out.

Now, a month before an important fight against an up-and-coming star like Miller, Okami bows out due to another injury. A win over Miller probably wouldn't have propelled Okami into number one contender status, but it certainly would have helped his cause. Instead, Okami will be forced to heal his knee while contenders Michael Bisping, Dan Henderson, Demian Maia and Nate Marquardt square off in separate bouts later this summer. In other words, even when Okami does return, he'll have to wait in back of a really long line before even being considered for a title shot.

So, I'm officially done with my 'Yushin Okami for No. 1 contender in '09" campaign. He's let me down one too many times.