The Curious Case of Tara LaRosa 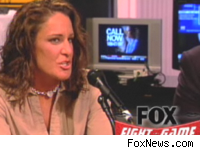 Tara LaRosa may be the best mixed martial artist -- male or female -- that you've never heard of.

While Gina Carano and Cristiane "Cyborg" Santos have received all the attention from MMA fans and media, the consensus pound-for-pound best female fighter in the world has seemingly been pushed aside. What a shame.

LaRosa's resume is as impressive as it gets. She's 17-1, riding a 14-fight winning streak and has defeated most of the top contenders in female MMA. Does that sound like another dominant fighter? Yes, it's safe to consider LaRosa the female version of Fedor Emelianenko.

So why all the fuss about LaRosa? Well, instead of fighting on, say, an upcoming Strikeforce card, she is competing on a local New Jersey show on June 5 against an unknown opponent. The best female fighter in the world deserves better.

Strikeforce is universally recognized as the unofficial home of female mixed martial arts. They've helped promote female fighters as much, if not more, than any organization out there. Yet for one reason or another, they have not signed LaRosa. Instead, the San Jose-based promotion has been forced to rebook fighters like Scott Smith and Nick Diaz two months after they last fought to fill up their upcoming June 6 card on Showtime.

Why not sign LaRosa, a free agent, to help build their female stable? Remember, female fighters are the one thing Strikeforce has that the UFC doesn't. If the best 205-pound fighters strive to fight in the UFC, the same can be said about female fighters looking to land a spot in Strikeforce. LaRosa is ready, willing and able. What else does she need to do to get noticed?

LaRosa joined me and the rest of the Fox Fight Game crew yesterday to talk about her struggle to gain notoriety in mixed martial arts. The video of her appearance is below.