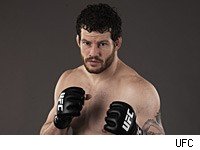 While UFC middleweight champion Anderson Silva focuses his attention on a light heavyweight showdown against Forrest Griffin, the organization has booked an intriguing 185-pound bout between former contender Nate Marquardt (28-8-2) and Demian Maia (10-0) for UFC 102 in August. Maia confirmed the news on his official Web site late yesterday.

The undefeated Maia was rumored to be next in line to face Silva for the middleweight title, but after Silva's second straight lackluster performance at UFC 97, the UFC decided to book him against fan favorite, Griffin.

Maia is a perfect 5-0 in the UFC, winning all of his fights via submission. In fact, four of his five victories won the "submission of the night" award. In February, he submitted former WEC middleweight contender, Chael Sonnen, in just 2:37 of the first round.

Meanwhile, since losing a UFC middleweight title fight to Anderson Silva in July 2007, Marquardt is 3-1. His lone defeat was against Silva's latest opponent, Thales Leites. Since then, Marquardt has looked more aggressive in his last two fights, TKO victories over Martin Kampmann and Wilson Gouveia.

This fight makes a lot more sense to me than booking Silva vs. Maia right away. The UFC needs to buy some time while a clear-cut No. 1 contender emerges in the middleweight division. In a perfect world, a Michael Bisping victory over Dan Henderson at UFC 100, followed by a Maia victory over Marquardt would set the division up nicely for late 2009 and early 2010. If Bisping wins, the UFC can book him against Silva in the UK. That fight would easily sell out any arena across the pond. Then, several months later, fans will finally be ready to view Maia as worthy of a title shot.

If Henderson and/or Marquardt wins, the UFC is left with a difficult choice to make: Should it award another title shot to a contender who already lost to Silva in the past? Sure, both Henderson and Marquardt put up a fight against Silva, but in the end, he did finish them with relative ease. Count me as one of those who has no interest in seeing a Silva rematch against either one of those fighters. Been there, done that.