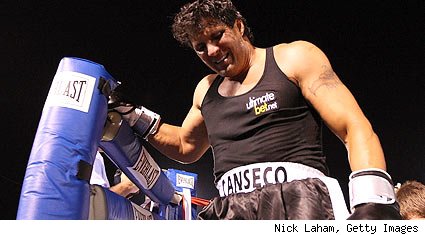 Jose Canseco has been retired from Major League Baseball for eight years, but he keeps finding ways to put himself into the headlines. The latest example? He has agreed to fight the 7-foot-2 Korean kickboxer Hong Man Choi in a mixed martial arts tournament in Japan.

The Japanese MMA promotion Dream has announced on its web site that Canseco vs. Choi will take place on May 26 in Tokyo as an opening round fight in an eight-man MMA tournament. Although that particular fight is a freak show, the full May 26 fight card, Dream 9, actually has some very good fights lined up featuring some of the top competitors in MMA, including Gegard Mousasi, Kid Yamamoto, Rameau Thierry Sokoudjou and JZ Calvan.

But if this card gets any attention in the United States beyond hard-core MMA fans, it will be a result of the presence of Canseco, who has dabbled in boxing before (losing to former Philadelphia Eagle Vai Sikahema and drawing with former child star Danny Bonaduce) but has never tried MMA.

Against Choi, Canseco will have his hands full: Choi is far from a great MMA fighter, but he's a skilled professional kickboxer who will have a huge size advantage over Canseco. If Canseco can't beat Danny Bonaduce, let's just hope he doesn't get seriously hurt against Hong Man Choi.

Former baseball star and controversial author Jose Canseco is scheduled make his MMA debut next month. Click through to see more professional athletes that have tried to cross over to MMA.

At the age of 32, former WWE champion Bobby Lashley is trying to become a successful fighter in mixed martial arts. Lashley recently defeated Jason Guida and his eyes are set on Bob Sapp in June.

Jose CansecoClick through to see more professional athletes that have tried to cross over to MMA.