Kim Couture Pulls Out of Strikeforce Event Due to 'Personal Reasons' 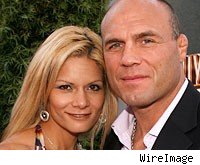 Kim Couture, the wife of UFC legend Randy Couture, has dropped out of her upcoming "Strikeforce Challengers" fight against Miesha Tate on May 15 due to "personal reasons." A Strikeforce source confirmed the news and the reason to FanHouse earlier this morning. No specific explanation was given for her decision.

MMAWeekly.com first reported the news citing a blog post on Tate's MySpace account. Tate insinuated that the reason Couture pulled out of the fight was due to marital problems with her husband, Randy.

"So Kim 'Sugar Free' Couture is pulling out of the fight supposedly cuz her and Randy are getting a divorce...........I'm so pissed right now......Sugar Free my ass!!"


When FanHouse called Xtreme Couture late last night to find out whether Couture was pulling out of the fight, a spokesperson for the gym replied, "We will not have any comment on that situation."

As of right now, there is no word on when Couture will be resuming her MMA career. The current plan is to book Tate on a future Strikeforce card, but no definite plans are in place.