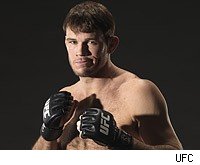 A little over a week after UFC president Dana White said he was "embarrassed" by Anderson Silva's performance against Thales Leites at UFC 97 in Montreal, the current middleweight champion has been booked in an exciting light heavyweight fight against Forrest Griffin at UFC 101 in August, according to Yahoo! Sports.

"Forrest loved the idea and said he'd do it right away, and Anderson told me he would fight anyone I wanted him to fight, no matter who it is," White told Yahoo! Sports' Kevin Iole. "So we got the deal."

Griffin was originally scheduled to face Thiago Silva on August 8 in Philadelphia. However, after a second straight lackluster middleweight title defense by "The Spider," it was clear that his next fight would have to be against a high-profile light heavyweight fighter. Forrest Griffin, a former 205-pound champion and one of two original winners of The Ultimate Fighter reality show, certainly fits that bill.

"I talked to (a reporter) the day after (UFC 97) and that's when I started working on this," White told Iole. "At the end of the day, it's my job to put on the kinds of fights that you in the media will like and that the fans will want to see. Silva and Griffin is the kind of fight that even other fighters are going to go crazy for. That's what I do for a living.

"I as a fan didn't like what I saw (at UFC 97) and I wasn't kidding when I said I wanted to walk out of the building because of how embarrassed I am. But I can tell you this: I'm going to be counting the days until this fight."

No word just yet on if Thiago Silva will be booked against someone else at UFC 101. The event is headlined by a UFC lightweight title match between champion BJ Penn and Kenny Florian.

"If (Anderson Silva) needs to challenge himself," White told the ESPN Radio 1100 post-fight show crew following UFC 97, "we've got a division right above that can be very challenging."