Jay Glazer: 'MMA Is in My Blood' 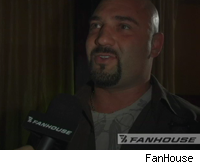 Jay Glazer loves covering the NFL for FOX Sports and has quickly developed into one of the best in the business at doing so.

However, while his colleagues catch up on some rest during the offseason, Glazer continues to mix it up with some of the best mixed martial arts fighters in the world at Arizona Combat Sports. And Glazer isn't just some celebrity who likes to hang out with fighters. He has a 1-1 professional MMA record, as well (his last fight was in 2003). Today, whether he's doing play-by-play for Affliction, or walking out to the Octagon with UFC light heavyweight Ryan Bader, Glazer has certainly become an MMA personality in his own right.

FanHouse caught up with Glazer on Thursday at the NCAA Football 10 party in New York to talk about his love for all things MMA and his thoughts on whether his friend Chuck Liddell has fought for the last time. The video interview is after the jump.