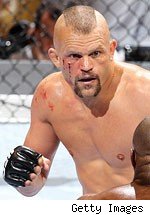 Although most fans and members of the media seem to think we saw Chuck Liddell fight for the final time at UFC 97, some of Liddell's fellow fighters disagree with the conventional wisdom that he's finished.

I spoke with Matt Hughes on Thursday, and he told me he doesn't believe Liddell is done.

"I don't think so," Hughes told me. "Chuck is still dangerous to anybody. Anybody that thinks that if Chuck Liddell hits them they won't go down is wrong. Chuck is a threat to anybody. As a friend I hope he doesn't leave the sport for two reasons: Number one, I like him and I like watching him. Number two, I still think he's good enough to do some serious damage to people."

And on the most recent episode of ESPN's MMA Live, UFC interim heavyweight champion Frank Mir and UFC lightweight No. 1 contender Kenny Florian both said they disagree with the rush to force Liddell to hang up the gloves.

Florian added, "I agree with Frank in that if there's nothing medically wrong with Chuck there's no one telling him he should stop fighting."

Florian said he believes that if Liddell is going to continue to fight, Liddell needs to improve his training to evolve as a well-rounded mixed martial artist. But Florian seems to think it's possible for Liddell, even at age 39, to improve as a fighter and return to the Octagon.

Note: My full interview with Hughes, which focused mostly on his upcoming fight with Matt Serra at UFC 98, will appear later at MMA FanHouse.