Takeya Mizugaki vs. Jeff Curran Likely for WEC 42 in August 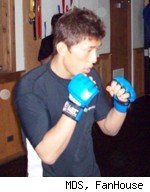 Japanese bantamweight Takeya Mizugaki, who put together a thrilling fight in a losing effort against World Extreme Cagefighting champion Miguel Torres this month at WEC 40, is expected to return to the cage in August against Jeff Curran at WEC 42.

A WEC source told FanHouse that Mizugaki vs. Curran has not been signed, but the promotion wants to put the fight on and both fighters have expressed interest. WEC 42 is likely to be headlined by Torres defending the bantamweight title against Brian Bowles, and Mizugaki vs. Curran is expected to be televised on the undercard of that show.

Curran is on a three-fight losing streak, but he's a complete, well-rounded fighter who would present a difficult challenge to Mizugaki. Curran's three straight losses are to three of the promotion's best fighters: Joseph Benavidez, Mike Brown and Urijah Faber.

A win would get Curran's MMA career back on track, but a victory for Mizugaki would be even more significant. The source said WEC officials were very impressed with Mizugaki's showing in his unanimous decision loss to Torres, and that if Mizugaki were to have an impressive win over Curran, he could get a second crack at the WEC bantamweight title.