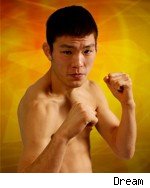 Two of the best MMA fighters in the world are returning to the ring next week to face off against each other in what is being referred to as a "special sparring exhibition" but sounds more like a silly waste of time for everyone involved.

Fedor Emelianenko, the best heavyweight in MMA, is going to grapple with Shinya Aoki, one of the world's best lightweights, at Wednesday's M-1 Challenge event in Japan. The official announcement of the meeting said the rules of the competition are still being negotiated, but it sounds like it's going to be five minutes of the two fighters trying out submission holds on each other.

Why are they doing this? Who knows? Obviously, Aoki could never hang with Fedor in any fight that included any type of full-contact striking, but I guess the two of them just feel like doing a little bit of rolling around.

And while they're obviously free to do whatever they want, I can't help but feel extremely disappointed. I want to see Aoki and Fedor fighting in MMA against top opponents in their own weight classes, not grappling with each other in a contest that won't prove anything for either one of them.

I don't agree with UFC President Dana White's criticisms of Fedor, but I do think he makes one legitimate point: When a fighter is in the UFC, we know we're going to see him face off against good competition on a regular basis. We can't say that about Fedor. The best we're getting for now is Fedor in a "special sparring exhibition," and we don't know when we'll see him in a real MMA fight.