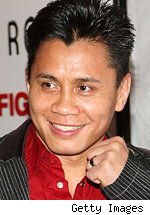 Has Cung Le turned his back on mixed martial arts?

That's the question on many fans' minds after it looked as though the current Strikeforce middleweight champion apparently put his MMA career on ice to pursue an acting career.

FanHouse caught up with Le in New York City just hours before the premiere of his latest motion picture, "Fighting" (which opens April 24 in theaters nationwide), to find if Le's days of competing in a cage are done.

Check out the full video interview after the jump.

"Of course I'm not done with mixed martial arts," Le said with a smirk on his face. "What are you guys talking about?"

Other topics discussed were when Le expects to fight again, his thoughts on UFC president Dana White and whether or not he thinks he can defeat UFC middleweight champion Anderson Silva.