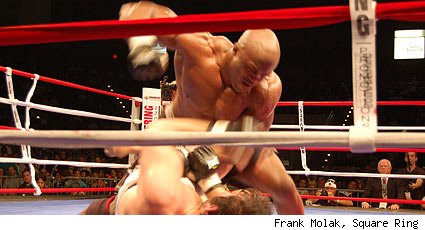 Lashley (2-0) recently defeated Jason Guida at the "March Badness" pay-per-view event in Pensacola, Fla. He will now face one of the biggest stars in Japanese MMA history. Sapp (10-3-1) last defeated Akihito Tanaka at the K-1 Dynamite!! New Year's Eve show in December. It was a bizarre sight to see as Tanaka was dressed as the Japanese anime character "Kinniku Mantaro" during the fight.

At the age of 32, former WWE champion Bobby Lashley is trying to become a successful fighter in mixed martial arts. Lashley recently defeated Jason Guida and his eyes set on Bob Sapp in June. Click through to see more professional athletes that tried to cross over to MMA.

Bobby LashleyClick through to see more professional athletes that tried to cross over to MMA.


Lashley is still in negotiations to fight in May for the Alberta-based Maximum Fighting Championship, but as of now, no deal has been signed.

The former wrestling star appeared on Total Nonstop Action Wrestling's pay-per-view event "Lockdown" on Sunday, however, there are currently no plans in place for him to wrestle for TNA in the future.

The Sapp-Lashley fight will be promoted by long-time boxing promoters, Prize Fight Promotions. They have promoted famous boxing bouts like Mike Tyson vs. Lennox Lewis in 2002 and Roy Jones Jr. vs. Glen Johnson in 2004. This pay-per-view event will be the first of many they are planning to organize. Expect several familiar MMA names to also appear on the card.

For more on Lashley, check out his new homepage FightBobby.com.

Did You See That?

The Brewers' Rickie Weeks gets hit in the face by a pitch from the Reds' Edinson Volquez during a recent game in Milwaukee. Incredibly, Weeks was not seriously hurt and stayed in the game. Click through to view more stunning sports photos.

Chuck Liddell, from Santa Barbara, Calif., reacts after being knocked out in the first round by Mauricio "Shogun" Rua, from Brazil, during their light heavyweight fight at UFC 97 in Montreal Saturday, April 18, 2009. (AP Photo/The Canadian Press,Ryan Remiorz)

Montreal Canadiens right wing Alexei Kovalev (27) and a Boston Bruins fan battle over possession of Kovalev's stick, which popped through a photographer's shooting hole in the glass, during the closing minute against the Boston Bruins in a first-round NHL hockey playoff game Thursday, April 16, 2009, in Boston. The Bruins beat the Canadiens 4-2. The stick broke, with both men ending up with part of it.