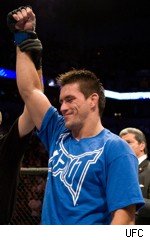 Maia, an undefeated Brazilian jiu jitsu specialist, was expected to get the next shot at Silva's middleweight title, probably at UFC 102. But after the way the Silva-Leites fight went, I just can't see the UFC putting the Silva-Maia fight on now. Silva-Leites turned a lot of fans off, and Maia is a very similar fighter to Leites. The UFC won't want to turn the fans off again, and that means the UFC won't match Silva up with a submission specialist again.

So Maia will probably fight someone like Nate Marquardt (and I think Maia-Marquardt is a great fight), while the UFC will try to find a bigger name to take on Silva next. Maybe that means defending the middleweight title against welterweight champ Georges St Pierre, although St. Pierre has a very tough fight ahead of him against Thiago Alves at UFC 100.

Or maybe that's moving up to light heavyweight and taking on someone like Rampage Jackson, although Jackson is probably going to sit out until he can contend for the middleweight title against the Rashad Evans-Lyoto Machida winner. Maybe a better option at 205 pounds would be Mauricio "Shogun" Rua, who showed Saturday night that he's back in a big way.

But it just can't be Anderson Silva vs. Demian Maia. Silva has looked disinterested by his last two opponents, Leites and Patrick Cote, and I'm sure he'd look disinterested against Maia, too. The sound of 20,000 fans booing the Silva-Leites fight was the sound of Maia losing his title shot. Which makes Maia the biggest loser of UFC 97.