Ken Shamrock: 'I Work on Controlling Myself Every Day. It's an Art' 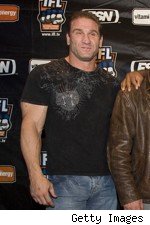 I'm pretty sure he hates me after this interview, but I've always liked Ken Shamrock, and one of the things I like best about him is exactly the quality he showed in my contentious interview with him: He doesn't back down to anyone.

So I took a particular interest in the article about Shamrock in Friday's Detroit Free Press. Because Shamrock actually sounds, after all these years of being known for his legendary temper, like he works hard at not letting his temper get the best of him.

"I work on controlling myself every day," he said. "It's an art. When you have a temper, and I did, you must learn self-control. When a football player takes a late hit and then dwells on it and makes an illegal tackle on the other guy, he penalizes his team, the fans, the coaches.

"Life is the same: if you lose your temper and hurt someone on the streets, you let down yourself, your parents, brothers and sisters, your job. You go to jail - for what?"

Interesting. If the hot-headed Ken Shamrock is capable of forcing himself to learn self-control, what excuse do the rest of us have for losing our tempers in traffic, or growing impatient in the bank line, or complaining that everything is taking too long?

Unfortunately, the Free Press didn't get much information out of Shamrock regarding his recent positive steroid test; all he said on that front was, "I can't say too much, because the suspension is under appeal and we are in the middle of that."