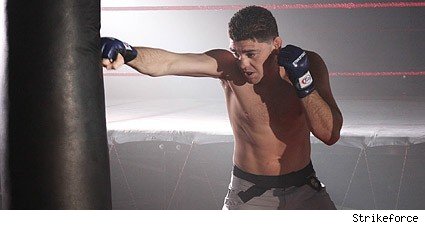 Nick Diaz spent three minutes and 57 seconds swarming Frank Shamrock in the second round of their fight Saturday night before referee Big John McCarthy finally stopped it. If you watched the fight, you know that already. But you might not know that Diaz had what may have been the most active round in the history of MMA.

CompuStrike, which tabulates statistics from MMA fights, says that Diaz attempted 181 strikes in the second round, making it the most total strikes thrown in any round that CompuStrike has recorded. The previous record was held by Michael Bisping, who threw 141 strikes in the first round of his UFC 70 fight with Elvis Sinosic. Diaz breaking that record is even more impressive when you remember that Bisping didn't finish Sinosic in the first round, meaning he had a full five minutes to throw 141 strikes. Diaz shattered the record in less than four.

Of course, Diaz has never been the most accurate or powerful of punchers, and he only landed 79 of those 181 strikes. So Bisping still owns the record for strikes landed in a round. CompuStrike has a complete list of the most strikes thrown and landed (PDF), and here are the Top 5 in both categories: