Fedor Emelianenko vs. Jeff Monson? And Cro Cop-Overeem and Arlovski-Barnett? 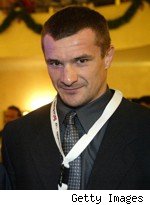 File this one under "cards we'd love to see but probably won't": A Croatian newspaper says there's going to be an Affliction/Dream co-promotion in Japan on July 20 that will feature Fedor Emelianenko vs. Jeff Monson, Mirko Cro Cop vs. Alistair Overeem and Andrei Arlovski vs. Josh Barnett.

The newspaper, Jutarnji list, is one of the leading newspapers in Croatia, so at first blush the source would seem fairly credible. But anyone who follows MMA knows that reports about what Affliction and Dream are doing next get bandied about all the time, and they almost always turn out to be wrong.

Still, the report is fun to think about. The paper reports, via our friend Robert at betwwx, that Croatia's own Mirko Filipovic will finally get his revenge against Overeem, who repeatedly kneed Cro Cop in the groin in their fight last year, resulting in a no contest. And the paper further reports that Fedor will take on Monson and that Barnett will fight Arlovski.

Again, I don't think this report is true. But if it's even close to true -- if any of those fights is really under discussion -- then July 20 could be a great day for MMA. Here's the translation of the article that Robert at betwwx provided us:

Despite being out of the action for all of 2009, Cro Cop is getting more offers than ever before in his career. A total of five MMA organizations (two Japanese and three American) would like to see Cro Cop fight for them. Cro Cop, for now, is leaning towards Dream. He wants to return to the ring as soon as possible but all options remain on the table.

The only certainty is a bout in an Affliction-Dream co-promotion in Japan on July 20. Mirko will be fighting Alistar Overeem. Their last fight left us with more questions than answers. These two competitors will finally meet in July.

Other notable names on that card include Fedor Emelianenko. The worlds best heavyweight will meet American Jeff Monson. Josh Barnet and Andrei Arlovski will also battle it out.

"I'm looking forward to fighting Overeem on 20th July and I cant wait to enter the ring. July is still a long way off. In the next few days I will know more about my schedule for 2009. I want to fight at least another four times this year, and I plan to fight five times in 2010." – explains Mirko adding that this year will mark his return to form.