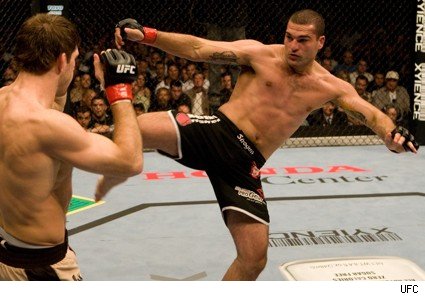 Saturday night's UFC 97 fight between Mauricio "Shogun" Rua and Chuck Liddell is a fight that MMA fans have wanted to see for years. But is it coming too late?

Rua told me in an interview that he has always wanted to fight Liddell, but he isn't at all disappointed that he had to wait until 2009 -- seven years after he started fighting -- to make it happen. He also told me that he's well prepared with his knee surgeries behind him, and that he has his eyes on the UFC light heavyweight title. The full interview is below.

Michael David Smith: A few years ago, you and Chuck Liddell were considered by many to be the two best light heavyweights in the world. How long have you wanted to fight Chuck, and are you disappointed that it didn't happen sooner?
Mauricio "Shogun" Rua: Chuck is an awesome fighter, and a legend of the sport. I always wanted to fight him, because I always had him as one of my favorite fighters, because of his aggressive style. However, I was never disappointed that it never happened sooner, because we were on different events, so I wasn't really thinking too much about that.

How much tape of Chuck's old fights are you watching to get ready, and what are you looking for when you watch tape?
I'm watching some, but I already have been watching him a lot through the years. I'm leaving this mostly for my team and my coaches. When you watch your opponent's tapes, you look for things that you can exploit, and things that he does very well that you should beware of.

During your fight with Mark Coleman, I thought you dominated the second round but then looked like you were running out of energy in the third. Did you have a hard time getting back into fighting shape after missing all of 2008?
Well, being sidelined for a year and a half, and having two major knee surgeries in a row, certainly didn't help. It's tough to come back, and I think I felt it. But, with that said, that's in the past and I don't want to give excuses, as I would rather work to improve.

After getting 16 months off between losing to Forrest Griffin and beating Coleman, you're only getting three months off between beating Coleman and this upcoming fight with Liddell. Is three months enough?
A lot of people complained about that, thinking it wasn't nice to me to have me fighting Chuck so close to my comeback fight. I don't think that way because I believe that gives me a chance to keep training, keep focused and keep getting the rhythm back. It takes a while for you to be able to train full force after the sort of surgery I had on my knee, so I see fighting in April again as a good thing.

You're a Brazilian jiu jitsu black belt, and yet only one of your wins is by submission, whereas you have 14 wins by knockout or TKO. Liddell's numbers are almost identical; he has 13 wins by KO/TKO and one by submission. Even though neither one of you usually finishes fights with submissions, do you think you have an advantage over Liddell on the ground because of your Brazilian jiu jitsu background?
This is all tough to say. I trust my ground skills, and in theory I would have a better chance if the fight hits the ground. But how often do you see Chuck on his back? Many things can happen in a fight, and I expect him to come very well trained, so I have to be ready for all aspects of the game and take my chances.

What was your weight during your training camp, and how hard is it for you to get down to 205 pounds?
During training camp I weighed about 213 lbs or something like that. It's not really hard because it's all a matter of proper training and proper dieting. I'm working on it with my team and I trust them, so it's not a big deal.

Like many of the top fighters in MMA, you're from Brazil. How popular is the UFC in Brazil right now? How often are you recognized in public as a UFC fighter when you're back home?
The UFC is very popular and is getting bigger and bigger now. I think the UFC is taking good steps to increase its popularity in Brazil, with more presence on Brazilian press, products for sale in the country, and wider TV coverage, and it's showing results. I'm often recognized here, but not as much as in the USA or Canada. I expect that to change a lot in one year or so, and hopefully the UFC will end up doing a new show here in Brazil, which would be awesome.

You're obviously hoping to get yourself into the light heavyweight title picture, but the next light heavyweight title fight will be Rashad Evans vs. Lyoto Machida. Do you have a prediction for that fight? That's tough, man! Both are great fighters, and both have somewhat awkward, unpredictable styles in a sense. I think both guys know to fight under the right strategy, and to see them fight each other is very intriguing. Although I like Rashad, as a Brazilian I have to hope Lyoto gets the belt, as we also are both sponsored by Bad Boy.

If you beat Chuck, where do you think that would put you among the UFC light heavyweights? How far off do you think you are from a title shot?
I know that if I win, I'll move up in the UFC light heavyweight rankings, but honestly I don't think how far that would take me, and what would that mean ranking wise. I think fighting for the belt is a natural consequence from your work inside the Octagon, and right now I just think about my fight with Chuck Liddell.