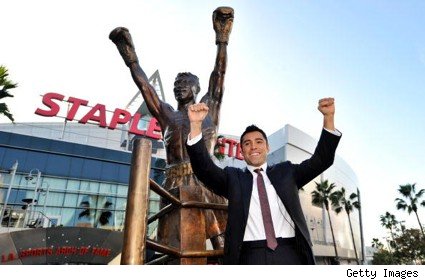 One of the reasons I think Oscar De La Hoya is going to announce his retirement on Tuesday is that he already has another lucrative gig lined up as a fight promoter. In a video below, De La Hoya makes clear that he plans to promote both boxing and mixed martial arts.
Watch De La Hoya Sizes Up Dana White on RawVegas.tv

De La Hoya also says he's not trying to take down UFC President Dana White, and that's the right approach. I have interviewed De La Hoya about his interest in MMA, and he sounds like he understands that he's not going to just waltz into the MMA business and overtake the UFC as the top promotion. He just wants to promote some good fights and generate some pay-per-view revenue. I don't know if Affliction is the right partner for a profitable business, but I think De La Hoya is a smart businessman and I'm glad he's getting involved in MMA.