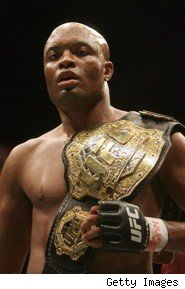 As much as I enjoy watching Anderson Silva fight, I've been disappointed with the UFC's decisions on his opponents. Silva's last middleweight title defense came against Patrick Cote in October at UFC 90, and his next title defense comes on April 18, at UFC 97, against Thales Leites.

I just don't think either Cote or Leites is in the same class as Silva, and I'd rather see Silva take on Yushin Okami at 185 pounds and then move up to 205 pounds to try to win the light heavyweight title. Silva, however, says that Leites has earned the opportunity to fight for the middleweight belt, and the Spider considers Leites a worthy challenger.

"The way I feel is that Thales Leites has obviously shown to the world that he deserves a title shot," Silva said on a call this week to promote UFC 97. "Thales is a very tough fighter, very well rounded, very good on the ground. But I feel that I'm very well prepared for this fight. I've trained very hard and I'm going to give it my all. The most important thing is to give a good performance for the world. And win or lose, this belt is going to stay in Brazil."

Silva's fight with Leites will be the first time he has fought a fellow Brazilian since 2003, three years before he started fighting in the UFC. But he said he doesn't think about the significance of a Brazil vs. Brazil UFC title fight.

"I've been very focused on my fight," Silva said. "I haven't paid much attention to the hype or the media around it."

As for Silva's last fight, he said on the call that after Cote had to quit the fight in the third round with a knee injury, Silva went back to his locker room and sparred for two rounds because he wanted to simulate the experience of fighting a full five-round title fight.

"It is true, I did a couple rounds of sparring in the back," Silva said. "That wasn't necessarily because I was upset about the fight, it was just because with our training, my strength and conditioning coach said, 'We train for five rounds, and for our muscle memory, we should utilize the five rounds.' So if the fight had ended in the first round, I probably would have gone to the back and sparred for four rounds. But it ended in the third, so I finished up my last two rounds."

Silva said he was disappointed with the bizarre ending of his last fight, but not with the way he fought.

"I wasn't happy with how the fight ended," Silva said. "I was happy with my performance in the fight. I executed everything I did in training, but unfortunately in the third round his knee popped. But that's the way the fight goes sometimes."