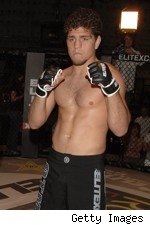 Nick Diaz has created quite a stir in MMA circles this week by telling the Los Angeles Times that he smokes marijuana and drinks large quantities of water to help him pass drug tests before and after his fights. I requested an interview with Diaz to ask him to explain those comments, and Diaz, through spokesmen, declined.

But on Friday I caught up with Diaz's coach and manager, Cesar Gracie, for an interview in which we discussed Diaz's marijuana use and his fight on Saturday night with Frank Shamrock. The full interview, which touches on everything from Michael Phelps to Diaz's participation in triathlons to the family tree of the legendary Gracies, is below.

It's legal by California law, but he still has to pass a test from the California State Athletic Commission, and he'll be in trouble if he tests positive, right?
If he tests positive, yes. But what he'll do is not smoke for weeks leading up to the fight so he'll test negative. He's fought in California and passed the marijuana test. So it all worked out.

He said he drinks 10 pounds of water a day. I interpreted that as saying that large quantities of water help you get the drugs out of your system. Is that what he meant by that?
I beileve so. He was talking about not smoking and flushing it out of his system. As much as he exercises, he burns off fat and flushes it out of his system. But remember, in California it's legal. You just can't be stoned during your fight -- you can't test positive during your fight.

Your name is legendary in MMA and Brazilian jiu jitsu. What is your opinion of whether smoking marijuana is consistent with being an MMA fighter or a Brazilian jiu jitsu practitioner?
I would have always said no, and I've told Nick several times, "Athletes can't do this." But I guess I've been proven wrong. Look at Michael Phelps. Look at Nick, who fights and does triathlons. I definitely wouldn't encourage people to use marijuana. It's my personal opinion that any kind of smoke, whether it be cigarette smoke or marijuana smoke, common sense would say it's detrimental.

Watching Nick fight, and knowing that he participates in triathlons, it's obvious that he has very good cardio. I would think that wouldn't be consistent with smoking anything, but he has good cardio and obviously Michael Phelps has good cardio.
I'm not a scientist and I'm not a doctor. I would be concerned with long term, 20 years from now what are his lungs going to look like? I just wouldn't gamble with that. Most of the people I've met in my life who are habitual marijuana smokers are couch potatoes and don't have a lot of motivation. Obviously guys like Phelps, other athletes who smoke marijuana -- I've heard of pro football players smoking marijuana -- I don't have a right to tell them and I don't have a right to tell you not to have a beer and I don't have a right to say not to smoke marijuana. It's a medical prescription that he has a prescription for. I don't think it's that big of a deal. It's not cheating. Remember, the Athletic Commission, their argument for banning marijuana is actually that it could hurt you -- you could be lethargic and unable to protect yourself. It's not cheating, it's that it could be to your detriment. That's why they don't want you to be on it. It's not like steroids. I think the media should focus on serious issues like steroids and pain pills, not minor issues like this.

Let's talk about the fight. You have fought Frank Shamrock. What's your scouting report on him?
I think he's a hard hitter. He's an athlete. He's explosive. He's very strong. He's a really good MMA striker. He's got so much experience and he brings that experience into the cage with him, so you're not going to surprise him. He's got a winner's mentality. He's going to make you earn it, for sure.

I was a little surprised when this fight was announced, just because Nick has fought at lightweight and Frank Shamrock has fought at middleweight. Is 179 pounds a good weight for this fight?
Nick would have taken that fight at any weight. He's a fighter. He's one of those guys who's going to take the fight because he wants the challenge. When he was fighting at lightweight, that was a tremendous cut for him and I really didn't like to see him that light. It took him a long time to get there and I don't think he was at his best at lightweight. I think Nick and Frank will walk into the cage at about the same weight. Obviously Frank is more used to fighting around that weight so that might be an advantage.

We're a couple of hours from the weigh in. What will Nick weigh in at today?
About 180, same as Frank, probably. The weight class is 179 with a one-pound allowance, so I assume both guys will come in at 180.

What kind of shape is Nick in right now? Will he have any rust because he hasn't fought in a while?
It's been a while but Frank is coming off a layoff and his arm was broken from a kick. He's in good shape and I think it's going to be a good fight.

How do you think Strikeforce is coming along after buying the EliteXC assets?
It's doing well. I've been around some of these MMA promotions that were like a dot-com start-up, coming in and spending crazy money, hiring too many people and giving ridiculous contracts to some of the fighters, paying people what they weren't worth. Scott Coker, the head of Strikeforce, is a different kind of planner. He's doing things the right way. I think he's going to be very successful.

I know you also coach Gilbert Melendez, who's on the co-main event. How's he doing and what do you expect us to see from him Saturday night?
Gilbert is in phenomenal shape. He really is. Unfortunately Josh Thomson broke his leg, and now Gilbert is fighting a different kind of opponent in Rodrigo Damm, so he's having to make some adjustments. He's a dangerous submission specialist with good stand-up and good wrestling skills, so he's well rounded. Gilbert doesn't have quite the pedigree in submission grappling that (Damm) does, but I think he's ready for this fight and in shape for a five-rounder.

You have by far the most famous last name in Brazilian jiu jitsu. Just to clarify, are you Royce Gracie's first cousin?
You know, I don't know what that is. Second cousin, I think. His father is my great uncle. We've had people in the family having kids until they're 60 years old or something, so it's kind of funny. Royce should be a lot older than me.

Well, thanks for your time. Is there anything else you want to say?
Just that I hope it's clear that I'm definitely not a proponent of the whole marijuana thing or whatever. I'm just saying that it's legal in California just like alcohol is legal. That's the bottom line.