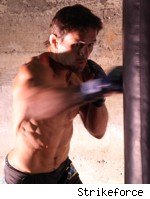 Strikeforce was put in a difficult position when its lightweight champion, Josh Thomson, suffered an injury that forced him to pull out of Saturday night's scheduled title fight with Gilbert Melendez. Strikeforce responded to that difficult situation by announcing that Melendez will fight Rodrigo Damm in a five-round fight for the interim lightweight championship. I think that's a mistake.

In MMA, five-round fights have a special status: Only title fights go five rounds, and that means they should be reserved for bouts that match top fighters against each other. With all due respect to Damm, he just hasn't accomplished enough to merit being in a title fight.

Damm's last fight was a first-round submission loss to Eiji Mitsuoka at Sengoku 4 in August, and his eight wins are mostly against small-time opponents with unimpressive records. In the USA Today/Sports Blog Nation MMA rankings, which compile MMA rankings from every available source, 42 different lightweights get at least one vote. Damm is not one of them.

None of this is to say Melendez vs. Damm won't be an entertaining fight. It might well be. But it shouldn't be a title fight. Five-round fights should be reserved for the truly elite of the sport, and Damm doesn't qualify.