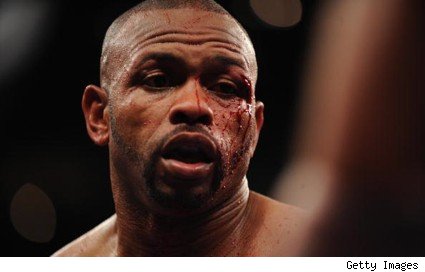 Will UFC middleweight champion Anderson Silva ever box Roy Jones? I don't much like the idea, but it's clear that both fighters are intrigued by the possibility.

Silva's manager, Ed Soares, said on a conference call this week to promote Silva's April 18 fight with Thales Leites at UFC 97 that while Silva is committed to mixed martial arts, he also dreams about giving boxing a try.

Silva's contract with the UFC reportedly has five more fights left on it, so it's not like Silva is going to be leaving MMA this year or, most likely, even next year. But he might leave for boxing eventually, and if he does, Jones is eager to fight him. Jones recently reiterated to the Los Angeles Times that he could see himself fighting Silva next year.

"I've heard as soon as [Silva's] contract is open, he'll fight," Jones told the LA Times, adding that he'll probably fight one more opponent this year, "and then I'll see what's up with Anderson."

I've talked to both Jones and Silva about the possibility of boxing each other, and I think they're both completely serious about it. I also think they both believe it's the kind of fight that fans of both boxing and MMA would purchase on pay-per-view.

But I don't much like the idea, and I think they're wrong about how big a draw the fight would be. Most boxing fans I know aren't interested in seeing a past-his-prime Roy Jones fight an MMA star, and most MMA fans I know want Silva to put all his energy into MMA and stop talking about boxing. That's why I'm glad that Soares said Silva doesn't intend to quit fighting MMA. That's where he should stay.