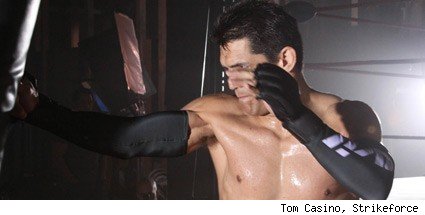 Frank Shamrock will always be known as one of the legends of mixed martial arts, but he's 36 years old, he hasn't fought in more than a year, and recently he's been focusing on broadcasting and on writing MMA for Dummies. So as Shamrock prepares to return to the cage Saturday night for Strikeforce on Showtime, will he be ready to fight against a younger opponent, Nick Diaz?

In an interview Tuesday, Shamrock told me he's more than ready. He also talked about his adopted brother Ken Shamrock, his once (and future?) opponents Cung Le and Tito Ortiz, and why he wants to see Kimbo Slice in Strikeforce. The full interview is below.

Michael David Smith: As you get ready to fight Nick Diaz, what is the final week of preparation like for you?
Frank Shamrock: A lot of media, watching what I'm eating and voracious reading.

What are you reading?
I'm reading a book called By Reason of Insanity. It's a very graphic serial killer novel.

One of the interesting things about this fight is the contrast between you and Nick, not just as fighters but as people. I'm betting Nick Diaz is not reading a book this week.
Yeah, I think you're right. He's probably watching cartoons and playing video games.

You two are different in a lot of ways. Is the biggest difference that you're 11 years older than him, or is it more than just a generational difference?
I think it's two things. We're definitely different generations, but I also think we're different mentalities when it comes to our sport. I've talked to the guy and he's not a bad guy, but he's definitely out there a little bit.

The Shamrocks: Frank Shamrock, right, says he's never had a close relationship with his adopted brother, Ken. "He's got an uncomfortably large ego," Frank says. Click through to see more family feuds from the world of sports.

The Fielders: Prince Fielder, right, says he wants to hit 52 home runs and win the MVP award because his estranged father, Cecil, never managed to achieve either during his career.

The Earnhardts: NASCAR star Dale Earnhardt Jr. and his stepmom, Teresa, feuded over Dale Jr.'s trademark No. 8 after his departure from DEI before the driver elected to get No. 88 for this season.

The Bryants: NBA star Kobe Bryant and his parents didn't speak for several years because they didn't approve of his marriage. However, they reconciled after the birth of his first child.

The Mayweathers: Floyd Mayweather Jr., left, has gone through some infamous rough spots with his father, Floyd Sr., and fired him as his manager in 2000. Floyd Sr. was set to train Oscar De La Hoya for a fight with his son before Junior announced his retirement.

The Bibbys: NBA star Mike Bibby once turned down his dad's offer of a USC scholarship. The now-Hawks guard also reportedly used to screen his father's phone calls.

The Williamses: The debate over the remains of baseball great Ted Williams caused a bitter and public rift between John Henry Williams and his half-sister Bobby-Jo Williams Ferrell.

The Capriatis: Jennifer Capriati was pushed by her father Stefano as a teen, leading to tension. She reportedly said he was "screwing up her life."

The Fraziers: After previously dropping a lawsuit against his daughter Jacqui Frazier Lyde over missing financial records, boxing legend Joe Frazier announced that he's ready to spar again in court.

The Shamrocks:Click through to see more family feuds from the world of sports

The fight itself strikes me as more of a good promotion than a good fight, in the sense that you guys are well known and can sell tickets, but you're far apart in terms of your weight class, your backgrounds as fighters and where you are in the sport.
I think that makes for a good fight. This sport started with the question, Who would win, a karate guy or a boxer? A judo guy or a wrestler? That was the original draw behind the sport. That's what caught everybody's attention. With us, it's the question of youth vs. age, generation vs. generation, style vs. style, and I think those questions make for interesting, compelling reasons to watch the fight.

Do you expect Strikeforce to succeed as a promotion where EliteXC and others failed?
I definitely think they will succeed. Above all things, Strikeforce is a stable, established business that has experience with live events, and it has the martial arts culture. I worked closely with EliteXC and they had no martial arts culture. They didn't really understand what they were doing, so the odds of them being successful were kind of a crapshoot.

You were one of the broadcasters on the last EliteXC show. Did you have a feeling at the time that it was going under?
Yeah, I had that feeling at their last two shows. I knew about their financial issues and some of their management problems. We were always walking a tightrope with them and unfortunately after October 4 we fell off the rope.

Kimbo Slice lost to Seth Petruzelli in that last EliteXC fight. Do you think we will see Kimbo in Strikeforce? And do you think we should see Kimbo in Strikeforce?
I think we will. Kimbo has some value. We got great ratings on CBS and they were in part attributable to Kimbo. He's definitely a draw. And I think we should see him because I don't think his time in the sport is done. Love him or hate him, we're still on the fringe of mainstream and we need people like him to get us in the door. Because everyone stays once they see it. Everyone loves MMA once they see it. But you've got to watch it.

Your adopted brother Ken Shamrock was supposed to fight Kimbo and pulled out on the day of the fight. When was the last time you talked to Ken?
At the pre-fight interview on October 3.

Did you ever have a close relationship with Ken? And do you want to have a relationship with him?
I have never had one. I've tried for years and realized that it's probably not possible, at least on normal terms. I made a decision several years ago that having Ken a part of my life is not enhancing my life.

Why not?
He's out there, man. He's way out there. He's got an uncomfortably large ego and the way he does business is not comfortable. It's not win-win for people. It's always what Ken wants and needs. I'm a businessman and I'd like to think of myself as somewhat of a normal human being, but he just doesn't function well.

Do you think we'll see Ken fight again?
Unfortunately, we probably will. I don't think he has another skill set.

What's your relationship with the man who adopted both of you, Bob Shamrock, like?
Still the same. I'm the black sheep of the family.

Back to your fight, what do you think Nick does well as a fighter?
He does a lot of things well. He's a very forward-moving fighter, he's a very aggressive fighter. He starts and ends the fight well. The other thing he does well is he's a comfortable stand-up guy but he's a great ground guy. He's got great cardiovascular conditioning, and he's very tall and lanky, and he uses that and uses it well. That reach and that length could be trouble for me on the ground and in stand-up as well.

Win or lose against Nick Diaz, do you think Cung Le will be your next opponent?
Yeah, he'll probably be my next opponent either way. I think that's destined to happen.

Is that a fight you're confident you'll win the second time around even though he beat you last year?
Oh, yeah. I just screwed around a little bit too much and had too much fun the first time I fought him and I took the wrong challenge that night.

Do you think Cung is more interested in being an actor than a fighter?
Oh, yeah. Definitely. If he wasn't he'd be here defending his title.

How much longer do you think you'll fight?
I plan to fight nine more years. I want to retire when I'm 45 and I'm pretty good with goal-setting and plans, so that should work out for me, and that's exciting. I've got Cung, I'd love to fight Tito, but I don't know. I think a new generation is about to emerge and I'd like to fight these young guys.

And it's realistic, you think, to fight until you're 45?
I think so. I'm a martial artist. I work out every day, I take care of my body. There's no reason I can't continue to evolve in my sport, evolve my game as my body changes, and keep on fighting.