WEC 40 Morning After: Torres, Mizugaki Are What MMA Is About 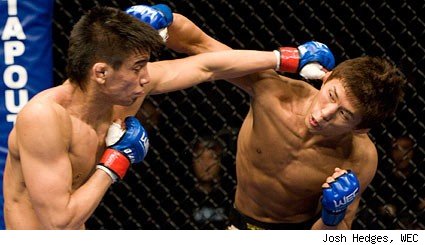 CHICAGO -- After spending half an hour bruising and bloodying each other's faces on Sunday night, Miguel Torres and Takeya Mizugaki showed nothing but mutual respect and admiration. They hugged in the cage immediately following their fight, which Torres won by unanimous decision to retain his World Extreme Cagefighting bantamweight title, and then they praised each other effusively afterward.

"I was hitting him with shots and he was just taking them," Torres said after the fight, sounding shocked by Mizugaki's toughness. "He wasn't affected by them. I was hitting him and I thought I was hurting him, but he has the samurai spirit. He's a very good fighter. ... I just want to thank him. It was an awesome fight."

I asked Mizugaki whether he agreed with the judges' decision, and I thought he might say that Torres got the benefit of fighting in his home town. Instead, Mizugaki insisted that Torres beat him fair and square, and that it was just an honor to compete with him.

"I do think the judges were right and so I do accept the loss," Mizugaki said through a translator. "He beat me in the clinch. In the future I would like to continue fighting in the WEC, win a couple more fights and I would like to earn a shot at Mr. Torres again."

When Torres heard Mizugaki's translator say that, he reached over and grasped Mizugaki's hand as if to tell him that he looks forward to a rematch some day.

Their graciousness afterward belied what a battle it had been in the cage. The fighters stood in front of each other and brawled for five five-minute rounds, making it the longest fight either of them had ever had. Torres won the fight with more effective punches and kicks, but Mizugaki showed off outstanding kickboxing skills and incredible power for a 135-pound man. Mixed martial arts doesn't get any better.

My favorite sights of WEC 40
1. Mizugaki and a couple members of his entourage were sobbing as they walked from the cage to the locker room after the fight. Why, you ask, was seeing grown men cry my favorite sight of the night? Because it showed just how passionate these men were about what they were doing. Mizugaki badly wanted to win this fight, and he couldn't hold it in when he came up short.

2. The graceful way Akitoshi Tamura used a flurry of kicks against Manny Tapia to win a close and exciting unanimous decision. In Tamura's previous fight, a loss to Wagney Fabiano, he never really got much of an opportunity to showcase his stand-up skills. But he's a good fighter, and both he and Tapia put on a very exciting show. I actually scored the fight for Tapia, but I don't have a problem with the judges giving it to Tamura; it was such a tough fight to score that when I asked four of my colleagues on press row how they scored the fight I got four different answers: Tapia 29-28, Tapia 30-27, Tamura 29-28 and Tamura 30-27.

3. Wagnney Fabiano opening his fight with Fredson Paixao by employing a high kick and a combination of punches. Fabiano has great Brazilian jiu jitsu skills, but he spent all 15 minutes of his unanimous decision win over Paixao working on his stand-up. Fabiano knows he needs to become a well-rounded fighter and not just a submission grappler if he wants to be a featherweight title contender, and he took a big step toward title contention Sunday night. The best moment in the fight came with a few seconds remaining in the second round, when Fabiano dropped Paixao with a left hook and then let him get back up only to land a flying head kick just as the round ended. It was a little disappointing that he couldn't finish, but still a great showing for Fabiano.

Awards
Fight of the night: Was there any doubt that Torres-Mizugaki was the Fight of the Night? It might have been the fight of the year.

Knockout of the night: Anthony Njokuabi won the award for his second-round TKO win over Bart Palaszewski.

Submission of the night: Just 1:07 into the first round, Rani Yahya got on Eddie Wineland's back and sunk in a rear-naked choke, forcing a quick tapout. Yahya may have the strongest Brazilian jiu jitsu skills of any 135-pounder in MMA, and he's probably only a win or two away from a title fight.

Quote of WEC 40
"Touch gloves, go back to your gloves. Uh, corners." – Referee Marc Wasem giving the final instructions to Torres and Mizugaki, perhaps feeling more nervous than either fighter.

Good call: Although Palaszewski said after the fight that he thought the referee stopped it too soon, that was the right decision: Njokuabi was all over Palaszewski, and there was no reason to expose him to more punishment.

Bad call: Most of the Mike Budnik-Rafael Dias fight was on the ground, and the referee seemed like he was taking his instructions from the crowd. For much of the fight Budnik and Dias were tangled up and not doing anything, but the crowd was silent and the ref didn't order a stand-up. It wasn't until late in the fight, when the fans started yelling, "Stand 'em up!" that the referee brought the fighters back to their feet -- and that came at a time when there actually was some action on the ground.

Stock up: Ben Henderson. By dominating Shane Roller with a first-round TKO victory, Henderson improved his record to 9-1. He's a rising star in the WEC's lightweight division.

Stock down: Jeff Curran. It's not that Curran is a bad fighter, but moving down to 135 pounds couldn't end his losing streak, and after falling to Joseph Benevidez he has now dropped three straight fights. Curran had been discussed as a future challenger for Torres' title, but that possibility is now very remote.

"I love training and I love fighting, but I need to get back on track," Curran said afterward. "I'm really honored to have fought Joseph. I think he's going to go on and do awesome things in the sport."

Fight I want to see next: Miguel Torres vs. Brian Bowles. Torres is by far the best 135-pound fighter in the world, and I'm skeptical that Bowles can give him as tough a challenge as Mizugaki did. But every time Torres steps into the cage, it's a pleasure to watch.