What If Miguel Torres and Fedor Emelianenko Were the Same Weight? 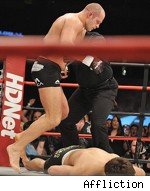 At a question-and-answer session for fans after Saturday's WEC 40 weigh-in, someone asked UFC interim heavyweight champion Frank Mir and WEC stars Mike Brown and Urijah Faber to name their choice for the best pound-for-pound fighter in MMA. The two featherweights chose a heavyweight, while the heavyweight chose a bantamweight.

Pound-for-pound arguments can degenerate into pure silliness quite quickly, but part of the fun of being a sports fan is making silly arguments, and I think it's interesting to consider how Torres would match up with Fedor if they were in the same weight class. And I think what really stands out in that scenario is that Torres would have an enormous reach advantage over Fedor.

Cannon Jacques at Bloody Elbow picked up on my post from Saturday about how much taller and longer Torres is than other 135-pounders, and there was a good discussion about just how amazing a reach advantage Torres has over the rest of his weight class. At 5-foot-9, Torres is extremely tall for a bantamweight, and he has long arms and legs. Fedor, on the other hand, is only six feet tall, which is short for a heavyweight.

As long as we're making silly arguments, let's say Rick Moranis makes a new movie, Honey, I Shrunk Fedor and follows it with a sequel, Honey, I Blew Up Torres, and the crazy contraption that can make people grow or shrink allows Rick Moranis to turn Fedor and Torres into a pair of 185 pounds and put them in the cage together. Once we got accustomed to Rick Moranis surpassing Dana White as the most powerful promoter in MMA, the most striking thing about the match-up of the middleweight Fedor and the middleweight Torres would be the reach advantage Torres would have.

But is that advantage enough? I don't know. It just so happens that this weekend I re-watched the DVD of Pride 21, Fedor's 2002 Pride debut, in which he beat Semmy Schilt by unanimous decision. It's amazing how effortlessly Fedor grabbed Schilt (who is almost a foot taller than Fedor), threw him to the ground, and pounded him. One of Fedor's most impressive traits as a fighter is the way he has consistently dominated opponents who have significant reach advantages. Then again, Torres capitalizes on his reach advantage as well as anyone in MMA.

So what if Torres and Fedor were the same weight? Again, I don't know. I think Torres is a more skilled martial artist than Fedor, but I think Fedor is a more ruthlessly effective fighter. Fedor is at the top of my own pound-for-pound MMA rankings, but that reach advantage sure would make Torres an interesting challenge.

What would happen? I'm predicting it right now: Torres beats Fedor at middleweight. Just as soon as Rick Moranis makes it possible.