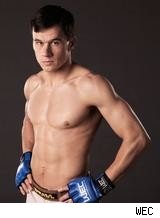 Brian Bowles will be watching with interest when Miguel Torres fights Takeya Mizugaki on Sunday night at WEC 40 for a very simple reason: He's preparing himself to fight the winner.

Bowles, who was scheduled to challenge Torres for the World Extreme Cagefighting bantamweight title before he had to pull out with a back injury, told me Saturday that his expectation is that he'll fight the Torres-Mizugaki winner for the title. Bowles said he expects to get the next shot at the WEC bantamweight belt. A a title fight between Bowles and either Torres or Mizugaki could take place at WEC 42 in August.

With a 7-0 record, Bowles is a bit inexperienced but still a strong contender for the WEC belt. And although he'd certainly be the underdog against Torres, he told me that he actually thinks he has an advantage over Torres when it comes to punching power.

"He's a talented fighter with good experience, but I think I hit harder than him," Bowles said. "I'm a more powerful puncher than he is, and I think I'm going to exploit that when I fight him."

Torres has dominated the 135-pound division to such an extent that it's hard to think of any contender as a particularly serious threat to his title. But Bowles feels confident that he's ready to give it a shot.