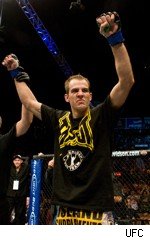 Junie Browning became a big name in the UFC by playing the role of bad boy on the reality show The Ultimate Fighter. But is Browning a legitimate fighter, or just a guy who got 15 minutes of fame on a reality show?

Based on how Browning looked Wednesday night in his UFC Fight Night 18 bout against Cole Miller, it appears that he's more reality star than fighter.

The much more experienced Miller had no trouble at all beating Browning, looking better than Browning on his feet and then catching him in a guillotine choke on the ground and forcing him to tap out in the first round. Standing over the fallen Browning, Miller asked, "Who's overrated now?" -- an allusion to pre-fight trash talk between the two fighters.

Although it's still possible that Browning could develop into a successful mixed martial artist, Miller showed how far he has to go. Miller looked like a more skilled fighter than Browning when they were on their feet, and on the ground it was obvious that Miller had significantly greater Brazilian jiu jitsu skills.

Browning, who trains at Xtreme Couture and had Randy Couture in his corner, will continue to fight for the UFC, and because of the name he made for himself, his fights will continue to be televised on Spike. But Miller (who said afterward that he'd like to fight the winner of the upcoming Spencer Fisher-Caol Uno fight) showed that he's a significantly better fighter.