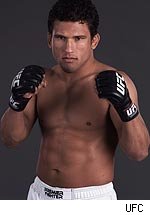 Tyson Griffin and Rafael dos Anjos put together a terriffic fight at UFC Fight Night 18 Wednesday in Nashville, one that had action on the ground and on the feet and ended with Griffin winning a unanimous decision.

In the first round, dos Anjos caught Griffin in a knee compression lock and appeared to have him in serious trouble. Although Griffin eventually pulled himself free of the submission attempt, he was limping badly on his left knee, and UFC announcer Joe Rogan speculated that he might have blown out his anterior cruciate ligament.

But as the fight went on, Griffin appeared to get more comfortable on his knee, and he didn't hesitate to plant his left foot for punches and kicks. It was ultimately his superior stand-up that gave Griffin the decision, which he won 30-27 on all three judges' cards.

Griffin said after the fight that there was pain in his knee, but no major injury.

"He definitely stretched my muscles, but I don't think there's anything too bad in there," Griffin said of his knee afterward. "I know how to deal with that pain, and luckily nothing popped in there."

As for his improved stand-up skills, Griffin said, "I've been training stand up I don't know how many years now, and thanks to my boxing coaches it's been getting better."

There's not much doubt about Griffin's improving stand-up game. Griffin has been involved in the Fight of the Night four times in his UFC career, and tonight's contest was likely the fifth.