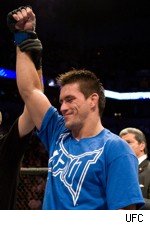 UFC middleweight Demian Maia has a perfect MMA record of 10 wins in his 10 pro fights, but he's about to get a much stiffer challenge in his 11th. Cage Potato is reporting that Maia's camp expects to get the next shot at UFC middleweight champion Anderson Silva, most likely at UFC 102 on August 29 in Portland.

Of course, that's assuming Silva beats Thales Leites at UFC 97 on April 18 in Montreal. But seeing as every single UFC fan I know is making that assumption, it seems fairly safe to pencil in Maia vs. Silva for the UFC 102 co-main event. No disrespect to Leites intended, of course.

The question, then, is whether Maia has any hope of beating Silva. Although he would obviously be a heavy underdog, I actually think Maia's world-class Brazilian jiu jitsu would at least make him a viable threat to Silva. (Leites has solid Brazilian jiu jitsu skills, too, but I have a hard time seeing a scenario in which he's able to get Silva into a position where he can use those skills.)

Although it's still more than five months off (and obviously plenty can change between now and then), UFC 102 is looking like it will be a solid card. The other headlining fight on the UFC 102 card is slated to feature a couple of heavyweight legends, with Randy Couture taking on Antonio Rodrigo Nogueira.