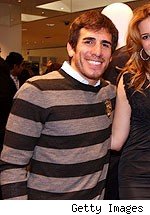 The main event for UFC 101 has been set, and lightweight champion BJ Penn will defend his title against Kenny Florian on August 8 in Philadelphia.

MMA Weekly reports that Penn said on his own web site that it's official, and that Penn will make his first title defense since May of 2008. Lately Penn has seemed to be obsessed with getting justice for what he perceives as cheating by Georges St. Pierre during their fight at UFC 94, but now Penn says he's ready to turn all his attention to facing Florian.

Other fights expected to be part of the UFC 101 card include: