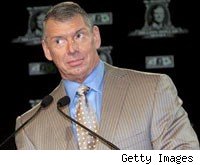 Boxing, professional wrestling and mixed martial arts are similar businesses in the sense that all three rely on pay-per-view television for a large portion of their overall revenue. But does that make them competitors?

WWE chairman Vince McMahon says boxing and MMA are competitors with each other, but that neither one takes pay-per-view revenue away from the WWE. In an interview with the Hollywood Reporter in advance of WrestleMania XXV, McMahon talked about the UFC.

Most people thought at one point that we would be competitors. But it turns out they are not competition to us at all, or hardly at all. They are sport, we are entertainment; it's a huge difference. The revenue they have cut into is that of boxing.

I'm not so sure the UFC has cut into the revenue of boxing. I tend to agree with Dave Meltzer, who wrote on Tuesday that "virtually all evidence points to pro wrestling and MMA appealing to similar demographics and boxing and MMA's audience being completely different."

Still, while I'm sure the UFC added some WWE fans when it signed Brock Lesnar, I don't think the UFC gaining those fans necessarily hurt the WWE. I just think that boxing, MMA and pro wrestling are three completely different entities, and they're not really competitors.