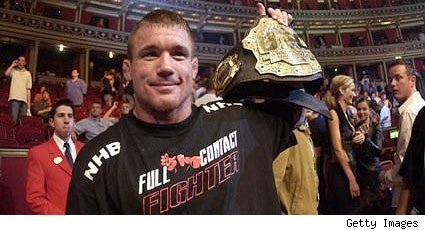 The main event at UFC 98, Lyoto Machida vs. Rashad Evans for the light heavyweight title, is an incredibly good fight, matching up two of the top 10 pound-for-pound fighters in MMA as well as the champion and top contender in the UFC's most talented weight class. And yet I sense that fans are just as excited about the co-main event, Matt Serra vs. Matt Hughes.

That's because of the bad blood that the two have for each other, bad blood that gets a little badder every time Serra and Hughes open their mouths. The latest salvo comes from Serra, who tells Sherdog:

"The thing is this, this sport you deal with a lot of guys in this sport and most of them are cool," said Serra. "It's a rarity you find an a--hole and I found one. I'm going to get paid to punch him in the mouth. I'm going to do to him what you should do to every bully and that's not only in America but everywhere in the world. What should you do to a bully? You should punch him square in the mouth. I'm getting paid for it. So who's got it better than me? ...


My guess is that the fans at the MGM Grand in Las Vegas will be split about evenly between Serra supporters and Hughes partisans, and that should contribute to a great atmosphere. We've been waiting two years for this fight, and I have a feeling this one will be worth the wait.