Ryan Bader: 'I Want to Win That Belt' 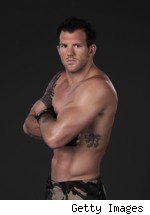 Four months after winning the light heavyweight tournament on the eighth season of The Ultimate Fighter, Ryan Bader is preparing to get back to the Octagon with a fight against Carmelo Marrero at the UFC Fight Night on April 1. And while Bader says he expects Marrero to give him a tough test, he has goals that go far beyond just winning this fight.

In an interview Tuesday, Bader told me he has big goals for himself in the UFC, and he expects to win a title belt some day. He also talked about beating Vinny Magalhaes the last time he stepped into the Octagon, training with FOX's Jay Glazer, and what it was like living with his controversial Ultimate Fighter housemate, Junie Browning. The full interview is below.

Michael David Smith: How has your life changed since you won The Ultimate Fighter?
Ryan Bader: It hasn't changed too much. It's a little more recognition. After the Finale I tried to heal up a little bit and took some time off, but I got right back into training and trying to eat well, and focus on my fight. That's really all I've been doing. I'm just looking forward to fighting.

You had an injury when you won The Ultimate Fighter Finale?
Just nagging injuries that I couldn't train 100% on. I had to spar at 70%, which I didn't feel good about. Luckily it worked out for me, but now that I'm 100%, it's like night and day. I feel great in this training camp. I feel 100% which is great, because the last fight I wasn't. It's great to be healthy, do the sparring and everything else.

Are you surprised by how easily you won the fight with Vinny Magalhaes? You basically landed a punch and made him crumple to the ground.
When it happened it was a little surreal. Winning that show had been my goal for a year, so there were a lot of emotions. Going into that fight everyone on the Internet said I was the underdog, but my training partners and my camp knew what I could do. That was the game plan, to go in there and land a big right hand on him. When it happened, everything came together.

Your season of The Ultimate Fighter -- not necessarily you personally, but the show you were on -- has been criticized as reflecting badly on the sport. Do you agree with that criticism?
Yes and no. Definitely, you don't want a bunch of hooligans representing the sport. Drinking urine -- seeing those things really aren't the best for MMA. At the same time, people tuned in, and that's what Spike was looking for. They're in the business of getting ratings. They'll put on the worst stuff they can for the shock value to try to get those ratings. It was a high-rated show, and a lot of it was because of Junie. He knew what he was doing. He was acting for TV. Obviously, he's got something wrong with him, but a lot of it was also for TV. Some parts of the show I was kind of embarrassed to be part of, but it is what it is, and it helped me get to where I am today, so I can't really complain too much.

Have you had any contact with Junie recently?
It's weird. Junie can be the nicest guy, the most respectful guy. In the house he was nuts, but I think he's a good fighter. I think he's very talented. I think he can be kind of like Chris Leben, and mature and grow over his career.
I don't think it was the best for the sport, the way he acted on the show, but he's not all bad. I'll see him at UFC fights and he'll be the most polite guy you'll ever meet. But I don't have to deal with him anymore or be stuck in a house with him, so that's good.

Let's talk about your upcoming fight. What do you know about your opponent, Carmelo Marrero?
I actually watched Carmelo fight live in the WEC, he fought one of my training partners, Steve Steinbeiss, and won a very close split decision, and I was there for that fight. He's a great wrestler, great conditioning, but I think I'm a better wrestler. I think it'll be a good fight. I don't have one specific game plan, just have to see where it goes. Maybe look to put him on his back -- put a wrestler on his back and he's in another world.But really, I'll go where ever this fight takes us.

You said you think you're a better wrestler. Is there anything you think Marrero does better than you? Are his submission skills more advanced?
No, he does have submission skills but I think we're pretty even on that. If you ask my training partners or even [Ultimate Fighter coach Antonio Rodrigo Nogueira], I can hold my own in submissions.

I've heard people say the UFC wanted to give you an easy opponent in your first fight after winning The Ultimate Fighter but I actually don't think Marrero is an easy opponent.
Not at all.

Do you think the UFC wants to build you up and get you some wins?
I would like to think so. It means they want to put their marketing behind me. But I don't think I have an easy fight on April 1. Carmelo Marrero is a tough fighter. I like how our styles match up, I think I can use my wrestling, so I like the fight in that respect, but I don't think they gave me a gimme fight at all. He's a tough dude, and I can think of tons of other guys who would be easy fights. I also think with [fellow Ultimate Fighter winner] Efrain Escudero, before he got hurt they gave him a fight with Jeremy Stephens, so I don't think they were giving him an easy fight either.

What is your training like right now?
This week I'm keeping to the same schedule. I might cut back a little bit, but yesterday I went five rounds of hard MMA sparring with a fresh guy every round. So I'm in great shape and I feel good. Toward the end of the week I might taper down and not go 100% in sparring, but I'm still doing my strength and conditioning, still running, still doing my jiu jitsu in the morning and then going in at night and doing my stand-up. Next week I'll focus more on things to keep my weight down, jogging and working on a lot of technique while cutting weight. I don't like to take any time off because I think with all my time I should be trying to get better.

How much do you weigh? Do you have trouble getting down to 205?
I'm 225 right now. No trouble really at all. I've been doing it my whole life. In college wrestling we had to make weight every weekend, so it's not bad at all. I get it off easily.

I've heard you sometimes train with Jay Glazer?
Yeah, Jay comes in every once in a while when he can, when he's not doing his football stuff, he comes in and rolls with us. I'm pretty good friends with him, so he'll come in and we'll beat him up a little bit.

How are his MMA skills?
He's very skilled. He's good on the ground. His jiu jitsu is very good and his stand-up is definitely up there too. He doesn't do a lot of sparring, but he has good technique. He goes too hard all the time. Even on the mits, we'll tell him to calm down and just focus on technique but he's going 100 miles an hour, so it's pretty funny.

What is your relationship with CB Dollaway and Cain Velasquez like?
I wrestled with them at Arizona State, we all worked together then, and we were all All-Americans our last year at ASU. I still train with C.B., as well as Carlos Condit, who's getting ready to fight on the same card on April 1. Carlos recently joined our gym, and he has been a great addition, he brings a lot of intensity.

And you and C.B. have been friends for a long time?
He was my training partner every day when we were wrestling. C.B. is a very good friend of mine and it's nice that we're now in the same situation, fighting with the UFC. It's nice not to do it by yourself, to have someone training with you.

Did you guys talk about MMA when you were in college?
Yeah, a little. We talked about it. We knew Cain was going to get into it. I didn't get serious about it until a year later when I got an office job in marketing and started to miss being an athlete. That really wasn't what I wanted to do, so I gave MMA a try and after my first fight I loved it.

Will you guys be watching Arizona State in the NCAA Tournament?
We can't go to the game, unfortunately. This weekend we've got nothing but training. I'm sure we'll be watching on TV, but I wish I could go out to the Tournament.

What are your goals? Do you think about what you want to accomplish, both this year and in the long run?
This year is basically just that I want to win my fights, one at a time. I know I'm nowhere close to having a title shot, I'm starting at the bottom of the totem pole, so I just want to win one at a time. My ultimate goal is to have a UFC belt one day. I wouldn't be in this if I wanted to be mediocre. That's my goal in the next five years, to fight for that belt and win that belt. You can't do this sport halfway. I'm going in there to win a championship.