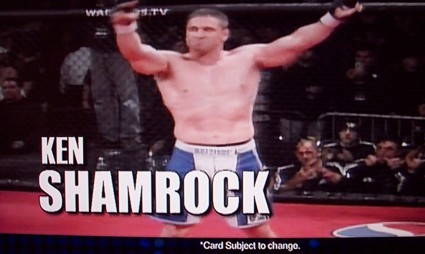 Above is a picture I just took off my own TV, showing a commercial for Saturday night's March Badness pay-per-view show. The only problem is that Ken Shamrock has been suspended after testing positive for steroids and is no longer on the card.

Yes, it's true that the ad says "*Card Subject to change." So maybe that makes it OK to advertise Shamrock's presence on the show, even though he won't be there. But it seems to me that a week after it became public knowledge that Shamrock was suspended, the folks running the March Badness promotion have had enough time to change the commercial to accurately reflect that the MMA main event is Bobby Lashley vs. Jason Guida, not Lashley vs. Shamrock.

The TV ads for March Badness have provided an interesting look into what the promoters think will sell. This is, first and foremost, Roy Jones' show. His company is the promoter and he's boxing in the main event, against Omar Sheika. But my sense from the advertising they've been running is that the promotion thinks that playing up the MMA side of the show is the best way to draw in pay-per-view buyers.

I like both MMA and boxing, and I'd like to see joint shows succeed. I just wish the commercials would accurately reflect what the pay-per-view buyers are purchasing.