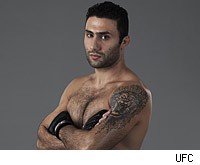 Karo Parisyan was once among the most promising young athletes in the Ultimate Fighting Championship. But Tuesday's ruling from the Nevada State Athletic Commission is the latest sign that Parisyan will never fulfill his promise.

MMA Weekly reports that Parisyan was suspended for nine months for testing positive for the painkillers oxymorphone, hydromorphone, and his win over Dong Hyun Kim at UFC 94 was officially changed to a no contest. He was also fined $32,000, which was 40% of his purse for the fight.

Sherdog reports that Parisyan begged the commission for leniency, saying, "This is my only form of income. If I don't fight, I'm nothing. I'm very, very sorry. It was completely unintentional. This is embarrassing for me."

The 26-year-old Parisyan had just turned 21 when he won his first UFC fight, in 2003. As he rose up the ranks, he earned wins over top competitors including Nick Diaz, Chris Lytle, Matt Serra and Nick Thompson. But he's been hampered by problems ranging from back injuries to severe anxiety attacks, and by the time he returns to the Octagon, it will have been two years since he won a fight. Let's hope this suspension is the motivation he needs to turn his career around.