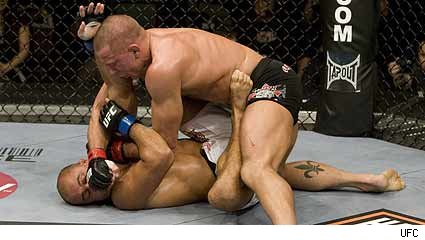 More than six weeks after Georges St Pierre beat BJ Penn at UFC 94 in one of the biggest fights in the history of mixed martial arts, the Nevada State Athletic Commission Tuesday held a hearing into Penn's accusation that St. Pierre cheated by having grease rubbed on his body.

Among the oddities of Tuesday's hearing was that Penn's mother, Lorraine Shin, read a prepared statement detailing why she thought the commission should take action.

"It's not for the love of my son; it's for my love of the sport," Shin said. "It's to protect every fighter that comes forward. It's not for just my son. It's to do the right thing."

But while the Commission heard the argument from Penn, his camp and his family that St. Pierre cheated to win at UFC 94, it did not take any action against St. Pierre. And the Commission's Executive Director, Keith Kizer, indicated that no disciplinary action is likely to be taken.

"I have no plans to bring anything against anybody in this case," Kizer said.