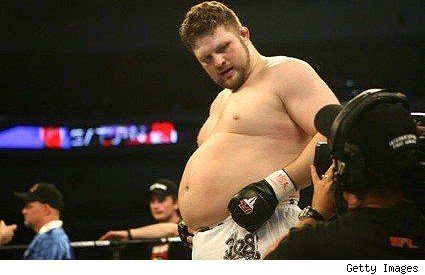 Roy Nelson is an MMA fighter with a 13-3 record, but to look at him, you'd never believe he was a professional athlete. So as I interviewed Nelson about his preparation for his upcoming fight with Jeff Monson in Saturday's "March Badness" event, the first thing I wanted to ask him about is his weight.

Michael David Smith: How much do you weigh right now?
Roy Nelson: Right now, probably like 263 or so.

Don't you think you'd be a better fighter if you lost, say, 30 pounds of fat?
You know, I would say probably not. It doesn't matter what I do. I probably train just as hard or harder as everybody. It's just how my body type is.

It's surprising. Your physique is really different from every other legitimate professional fighter. There are guys like Butterbean who are fat guys, but as far as the really legitimate heavyweights, you don't look like any of them.
Yeah, I just look at it as, there are some guys have a six pack but can't fight. I'd rather just be the guy who knows how to fight.

And you do know how to fight. You had Andrei Arlovski in a lot of trouble early in your last fight. When you look back at that, what do you think?
I won the first round, he won the second. It was one of those fights where it changes your career if you learn to become a better fighter for it, and I think I'm a 10 times better fighter now. I learned not to give up my game plan and not to let the ref control the pace. I had it all planned out in my head, how the first round was going, and then the ref came in and I lost my head.

I thought the ref's decision to stand you up when you had side control on Arlovski was horrendous. What did you think?
I felt like I was the more dominant grappler, and basically I could do whatever I wanted.

How much more are you recognized from fighting on CBS? Has it changed your career in that respect?
You know what? Not really. People who were really into the sport anyway already knew who I was. If anything, with casual fans, I think it might have hurt, because all the controversy, with Seth Petruzelli and Kimbo Slice, that kind of tainted it a little bit.

What did you make of the whole Kimbo-Seth debacle?
Kimbo was never a real fighter to begin with and he got thrown into the limelight. He was one of those guys who was just an up-and-comer, and I think he's better off doing TV and movies.

Do you resent the fact that Kimbo vs. Ken Shamrock was scheduled to be the main event, when people who know MMA know that you against Arlovski was a better fight?
From the fan perspective, most fans knew what they were looking at, but the casual viewers who just want to see blood or something, that main event was for those viewers who look at it like a freakshow.

What kind of fight do you think you're going to have with Jeff Monson?
Jeff's a good, good grappler. He's one of the guys who's been in the business a long time. He's one of the guys who's always around, fighting every round, he's fought top competition and doesn't get knocked out or submitted. He's going to be a tough, tough opponent. I would rank him near the top of the food chain.

Where do you think you rank among MMA heavyweights?
Right now, easily in the top 10. With MMA it's always about styles and match-ups. It's basically all styles. And it's hard to rank, with upsets like Shane Carwin beating Gabriel Gonzaga and Junior dos Santos beating Fabricio Werdum.

If you were to beat Monson, what kind of opponent do you think you'd get next?
My whole thing is just to fight the best guys in the world. If I beat Jeff, I see myself fighting higher level competition and keep knocking away until I get that No. 1 shot.

What is your contractual status? Do you want to sign with UFC or Strikeforce or Affliction?
The way I look at it with contracts is, as long as I can pay my mortgage and feed my family and be with an organization that wants me, I'm game for whatever. Right now Roy Jones wants to promote me and they're taking care of me, and they're making sure I'm happy and my family's happy.

Realistically, if you want to fight someone in the Top 10, that's probably got to be with Affliction or UFC, right?
Well, who's in the Top 10 depends on who controls the media. There are some guys who are in the Top 10 just because of the PR machines. Fedor's No. 1, and he's with Affliction and M-1 and whoever the Russians are. So you never know where Fedor's going to be. And then you have Arlovski, who's No. 2 or No. 3 or No. 4 depending on which rankings you look at, but now he's going to boxing.

Then you have the UFC, with their heavyweights. They have Brock Lesnar, who only has four fights, and you're like, "OK, you beat up on a guy you out-weigh by 50 pounds and shouldn't be fighting at heavyweight."

So you're not impressed with Brock Lesnar?
I'm impressed that he gets in the cage. I respect him. But he's not the most dominant guy. He's just a wrestler. That's all he is. A big, good wrestler. As long as you know how to sprawl and hit back, you're going to be OK. If Randy was 30 pounds heavier he would have beaten Brock. Randy walks around at 220. Most light heavyweights weigh more than that.

Who do you think is the UFC's best heavyweight?
Right now, I would have to say Frank Mir, just off the pure fact that he already beat Brock, and he has the TV championship, or whatever that's called, the interim. So he'd probably be the best.

Do you think Fedor Emelianenko is by far the best heavyweight in the world?
I think Fedor is one of those guys who capitalizes on a lot of people's mistakes, and nobody capitalizes on his mistakes. He's a legitimate No. 1, easily, but if you watch his last fight with Arlovski, Arlovski was handily beating him, but then he did that flying jumping knee or whatever that was, and that's it. That's the way the fight business works. One punch can change the game. It's just like me fighting Arlovski. That one punch changed it, and the ref just wanted to make sure Arlovski won. So, one punch can change everything or one submission can change everything, but yeah, Arlovski was handily beating Fedor.

How do you think you'd do against Fedor?
I think I'd do pretty good. We both have punching power. We both have very unique styles. I think the difference would be the ground game. He has that sambo, but when you get punched, it changes the whole dynamic. You can turn a black belt into a blue belt by punching him in the face.

I think our styles match, and styles make fights. He's a swinger, I'm a swinger, we both have good ground games. He doesn't like being on his back, but he's never been with a really good grappler on top. He usually gets good grapplers on the bottom.

Do you think you might fight Fedor some day?
Who knows? After this fight against Jeff Monson I'll be able to answer that a little better. M-1 controls Fedor, so they'd be the better ones to ask.

You're basically a free agent, so where do you want your career to go after the Monson fight?
As a fighter, you have your dreams and your goals, and my main goal is to fight the number one guy. And the best way to do that is to fight top competition.

Do you know Jeff well personally?
Yeah, we've hung out together, gone out to eat together. Jeff's a good guy.

And you're fine with fighting someone you like personally?
Yeah, because it's not like a fight on the street. It's not like you're trying to hurt me and I'm trying to kill you. It's a sport, like playing football. The other guy is trying to run the ball and you want to lay him out, but after the game you'd go out and buy him a beer.

Your fight with Monson is part of an interesting event, with most people probably buying the pay-per-view to watch Roy Jones box Omar Sheika. What do you want boxing fans to know about you and about MMA?
For straight-up boxing fans, MMA fights start on the feet, so it's just like boxing, but we have more ways to finish a fight, so that makes it more dynamic than boxing. With MMA, there are so many ways the fight can go, that's the drama. You don't know what's going to happen next. With boxing, sometimes you'll watch the first three rounds, then you'll change the channel and turn it back in the 10th round. With MMA, you have to watch all 15 minutes. You'll want to watch every second.