Bobby Lashley on Leaving WWE for MMA: 'I Want to Be a Champion' 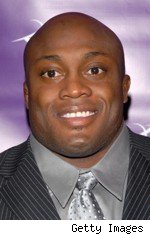 I interviewed Lashley this week about his upcoming fight with Jason Guida (Lashley told me he knows nothing about Guida and asked me to tell him what I know), about the cancellation of his previously scheduled fight with Ken Shamrock (Lashley doesn't hold it against Shamrock that he was suspended after a positive steroid test) and about his goals in MMA (Lashley wants to be a champ).

Michael David Smith: How did you find out that Ken Shamrock tested positive for steroids and your fight with him was off?
Bobby Lashley: A photographer that I did a photo shoot for sent me a text message. I thought it was a joke at first, but then I found out that he did test positive and the fight is off.

How prevalent do you think performance-enhancing drugs are in MMA?
I really don't know. I haven't heard a lot of people talk about it. I've heard people saying as much as, "Hey, some of the fighters are on something." I don't think that's actually true, and I also don't like the name "performance enhancing." I don't think people take them to enhance their performance so much as trying to help them train harder. I think that's more what it is.

I think that Ken wasn't out to take that substance so that he could beat that Ross Clifton guy. I'm sure he wasn't using for that. I know he wasn't thinking, "Oh, I've got to fight Bobby in a couple months, I've got to get huge." I think like any other fighter or any other athlete who takes supplements, he was taking something to enable him to train harder and train longer.

How prevalent are performance-enhancing drugs in pro wrestling?
I don't think there's any now.

Really?
They have a really, really, really strict testing policy in the WWE. I know that for a fact. So I know that there is no one who is really on anything now. I think in the past there were some, but -- and also, in professional wrestling it's not "performance-enhancing." You're not enhancing your performance. You're getting bigger and stronger, but it's not like that makes you win in wrestling. I think there used to be more wrestlers on something than there are now, but it's not like everyone was on something in professional wrestling. Not at all.

At the age of 32, former WWE champion Bobby Lashley is trying to become a successful fighter in mixed martial arts. Lashley made his debut in December 2008 with a first-round TKO victory and will fight again later this month against Jason Guida. Click through to see more professional athletes that tried to cross over to MMA.

Bobby LashleyClick through to see more professional athletes that tried to cross over to MMA.

What do you know about your upcoming opponent, Jason Guida?
I know that his brother is Clay Guida. That's about it. If you can tell me anything, that would be great.

Well, I can tell you that he has a losing record. His career record is 17-19.
Yeah, but the thing is, it's not so much how many you've won, it's how many you've been in.

Do you expect to watch video of his fights in the next week?
I'll watch everything that I can on him.

So you think film study is important?
Oh, yeah. I trained at the Olympic Training Center with some of the greatest athletes in the world, and at the top level in every sport, elite athletes all watch film. Football players watch their opponents. In baseball, hitters watch pitchers. Wrestlers watch other wrestlers. You've got to scout your opponent so you can come in with the proper game plan.

When I was going to fight Ken Shamrock, I was watching video of Ken. How he approached his opponents. How he got into his submission holds. How he gets takedowns. How he reverses.

What are your goals in MMA?
I want to be a champion. That's the main goal. Of course, everybody wants to make it in the UFC. That's the top organization. But Affliction is coming up real strong. Strikeforce is coming up real strong. In Japan there are a lot of great fighters there. I just want to make it to the top. When I went into professional wrestling, I wanted to go to the top, and now that I'm a fighter, I'm training as hard as I can, as long as I can to make it to that level, to be the best.

Do you have any idea of how long that would take? Everybody compares you to Brock Lesnar. He was 1-0 when he got into the UFC, he lost his first fight to Frank Mir, then he beat Heath Herring and he got his title shot and became a champion. Is it realistic for you to think it can happen that quickly?
No, because that's not the route I'm taking. I want to build up my skills. I've got a lot to learn and I want to learn before I fight for a title. I'm taking my time, but at the same time I hope that in the near future I beat some people and I do get that chance.

But you're 32. Is it realistic for you to take the time to build your skills the way most fighters do?
That's true, I'm not planning to spend 10 years in the business.

Do you have an idea when you might fight again after Guida and who your opponent might be?
I don't know who it's going to be, but I want to stay active. I want to fight. If Ken ever wants to fight with me, if he wants to go to Japan and do that fight, I wouldn't mind doing that also. I know it's kind of a touchy subject, but to do one fight in Japan, I don't mind doing it. I think it's a great fight. I think he's a great fighter. And I know that the guy wasn't maliciously trying to go out there to try go gain an advantage over anybody. At the same time, I don't want to burn any bridges. But if people want us to fight in Japan, I wouldn't mind doing that.

So you could fight Ken Shamrock this year?
I don't know. That's completely up to him.

But if a Japanese promoter came to you and offered you a fight with Ken Shamrock, you're open to that?
Yeah, I would. Yeah, absolutely. Yeah.

Do you think the state commissions would have a problem with that? In a sense, you'd be helping him circumvent his suspension.
I wouldn't want to do it if it hindered my career. I want to fight him, and it's unfortunate that it happened to him. I really wanted to fight him. I wouldn't do anything against the commissions' wishes. I wouldn't do that at all.

Let's go back to your own training. Do you have any veteran MMA fighters who train with you and teach you a lot, and anyone you watch and you try to emulate?
Not too much trying to emulate, but I look at the fighters at the top of the game and I try to find out what put them there. Some of the fighters we have at the gym, American Top Team, are right up there with the UFC's best, and I try to watch their training regimen. I watch Mike Brown. He trains hard. He's in the gym all day, training, working, sparring. He helps other people and he's an incredible person.

Another person is JZ Calvan. If you every see him work out, you'll get tired just watching him work out. After everyone is done training, he's still shadow boxing. He works to be the best. Another one is Thiago Alves. He works, he's a machine. He's going, going, going. At this gym, there are so many high-level athletes that you have to step up your game.

The sense I get is that "stepping up your game," that challenge, is what made you decide to leave a successful career in professional wrestling to try MMA.
I wanted to test myself. I wanted to go into a different realm. This is an opportunity to challenge myself. I want to push myself to be the best.