Kim Couture Returns to Strikeforce in May 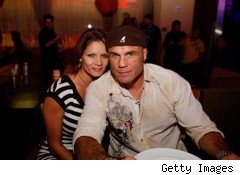 Couture, the wife of UFC legend Randy Couture and a sometime fighter herself, confirmed on HDNet's Inside MMA that she will fight on the May 16 Strikeforce card. Couture said she does not know yet who her opponent will be, but she has accepted an invitation to appear on the May card, which will be the second of the year for Strikeforce.

Couture is 1-1 in her MMA career. She lost her debut in June of 2008, falling to Kim Rose by unanimous decision in a fight that saw Couture hang on to go the distance after getting her jaw broken and her face bloodied just seconds into the fight. She then won her next fight, in November of 2008, beating a completely overmatched Lina Kvokov by first-round TKO.

The 33-year-old Couture fights at 130 pounds. Her fight is expected to be televised on Showtime, as part of the undercard on a show that includes Robbie Lawler vs. Jake Shields and Rafael "Feijao" Cavalcante vs Renato "Babalu" Sobral.