Forrest Griffin: I'll Be Ready to Return to UFC by July 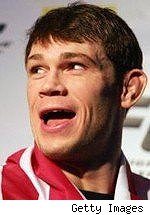 Former UFC light heavyweight champion Forrest Griffin says the hand injury he suffered when he lost his belt to Rashad Evans at UFC 92 is not as bad as previously reported, and he'll be back in the Octagon this summer.

Asked on HDNet's Inside MMA whether it's true that he could miss all of 2009, Griffin was emphatic that he won't be out that long.

"No, that's not true," Griffin said. "I'll probably be ready to fight somebody by July."

Griffin also showed off his hand, which is still visibly scarred from surgery, and although the hand looks bad, Griffin brushed it off as no big deal.

"I got me a little plate and some screws," Griffin said. "I can start hitting people in like two weeks. It's cool now. It's a little bigger. That's cool."

There's no word yet on exactly when Griffin will return to the Octagon or who his opponent will be, but if Chuck Liddell beats Shogun Rua next month at UFC 97, I think a Liddell-Griffin fight would make a lot of sense. That'd be a nice way to welcome Griffin back into the Octagon.