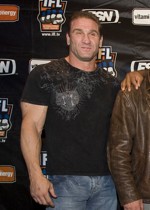 Although Ken Shamrock's steroid suspension has put a halt to his planned fight with Bobby Lashley, the fight might not be off for good: Lashley told me on Friday that he thinks there's a chance he'll fight Shamrock in Japan later this year.

"If Ken ever wants to fight with me, if he wants to go to Japan and do that fight, I wouldn't mind doing that also. I know it's kind of a touchy subject, but to do one fight in Japan, I don't mind doing it. I think it's a great fight. I think he's a great fighter. And I know that the guy wasn't maliciously trying to go out there to try go gain an advantage over anybody," said Lashley, who is now scheduled to fight Jason Guida in the May 21 March Badness event.

When the California State Athletic Commission suspended Shamrock for one year for testing positive for steroids, that meant he couldn't fight in the United States, because American commissions respect each others' suspensions. But Japanese promotions generally do not have policies against using performance-enhancing drugs, and fighters who have been suspended by American commissions often find work in Japan.

Lashley, however, also made it clear that he doesn't want to do anything that would upset the state athletic commissions.

"I wouldn't want to do it if it hindered my career," Lashley said of fighting Shamrock. "I want to fight him, and it's unfortunate that it happened to him. I really wanted to fight him. I wouldn't do anything against the commissions' wishes. I wouldn't do that at all."

Lashley's comments were part of a longer interview. Here's the full transcript.