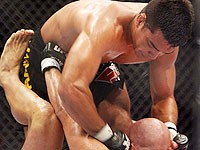 Although the Ultimate Fighting Championship has still not announced the main event of UFC 98, all indications are that light heavyweight champion Rashad Evans will take on Lyoto Machida -- and that Quinton "Rampage" Jackson will need more time off before he's ready to get back into the Octagon.

Initially, the main event of UFC 98 was supposed to be Brock Lesnar vs. Frank Mir for the unified heavyweight title, but Mir had to push the fight back to UFC 100 because of a knee injury. Once Mir pulled out, the UFC wanted to make Evans vs. Rampage the main event -- but Rampage, who beat Keith Jardine Saturday at UFC 96, will apparently need more than 11 weeks to recuperate from the Jardine fight.

Evans vs. Machida is a great battle featuring two MMA fighters who have never been beaten, but it's still a bit of a disappointment for the UFC from a marketing perspective: Evans-Machida won't sell as well on pay-per-view as Evans-Jackson or Mir-Lesnar would have. But the UFC will go with the fight it has, not the fight it wishes it could have, and that fight is a good one.