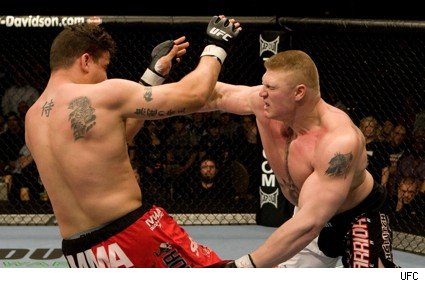 The UFC heavyweight title fight between Brock Lesnar and Frank Mir is expected to take place at UFC 100 on July 11, and not at UFC 98 on May 23.

A knee injury suffered by Mir has pushed the fight back six weeks. It will now be the main event of UFC 100, which is expected to be the biggest card in UFC history.

The official UFC 98 fight card at UFC.com no longer lists Mir vs. Lesnar. Currently the top fight listed at UFC.com is Matt Hughes vs. Matt Serra, but the UFC is expected to announce a title fight to headline the UFC 98 card.

UPDATE: During the UFC 96 broadcast, it was announced that Rashad Evans will fight either Lyoto Machida or Rampage Jackson in the main event at UFC 98.