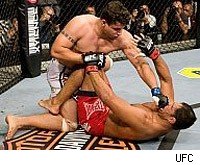 The UFC 98 heavyweight title unification fight between champion Brock Lesnar and Interim champion Frank Mir will reportedly not take place on May 23 as scheduled, as Mir has suffered an injury that will keep him out of the Octagon for at least a few months.


FiveOuncesofPain.com and MMAMania.com both reported the news Friday afternoon, although the reports conflicted about the nature of the injury and exactly how long Mir will be out.

It's not clear whether Lesnar will still fight at UFC 98 against a different opponent, or whether Lesnar will be put on ice until Mir is ready for the rematch. Either way, Lesnar-Mir was the heavyweight fight that UFC fans most wanted to see this year, and this news is a major disappointment.

UPDATE: UFC President Dana White has disputed the report that Mir has pulled out of the fight.