Matt Hamill on Fighting Mark Munoz at UFC 96: 'It's Going to Be a War' 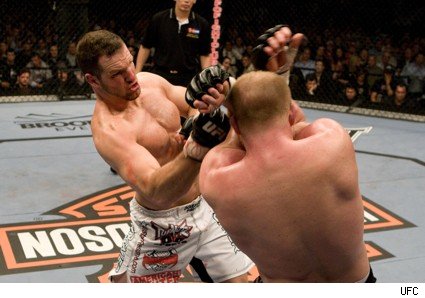 With a few days to go before his fight with Mark Munoz at UFC 96 on Saturday night, the Ultimate Fighting Championship light heavyweight Matt Hamill took some time out to answer our questions. The interview below with Hamill, who is deaf, was conducted via e-mail.

Michael David Smith: It's a 10-week layoff between your last fight at UFC 92 and your next fight at UFC 96. Is that long enough to recuperate?
Matt Hamill: After I won the fight UFC 92 I didn't get much damage and I was in a good shape.

Ideally, how much time would you like to get between fights?
Three to four months.

What has your training been like since your last fight?
Same as usual but (manager Duff Holmes) has created some pinpoint exercises that go along with the game plan.

Do you do a lot of running, or a lot of weight lifting, or anything else in particular to stay in shape?
Everything, plus working out in the pool with a weight vest, that's the hardest thing I do.

Is there any one particular part of your game you've been working on? Muay Thai or jiu jitsu or anything else?
Everything!

What kind of fight are you expecting from Mark Munoz?
It's going to be a war, I always expect the unexpected.

Munoz is a lot like you in that he has a strong wrestling background. How does that affect what you think you'll be able to do in the fight?
I have fought wrestlers before but mark has more technique in wrestling that will give me a challenge.

How much film of Munoz have you watched?
Not much, but I got most what I need!

Have you identified any particular areas of weakness you think you can exploit?
Yes.

Do you go into a fight with a specific game plan for a specific opponent? Or do you prepare the same way no matter who you're fighting?
I try to stick with game plan as much as possible. Its a solution to winning the fight.

In the final week before the fight, what is your preparation like?
Review the game plan, drill different parts of the fight and get mentally ready.

What are you walking around at right now and how hard is it for you to make the 205-pound limit?
My normal weight is 225, right now I'm about 215. I have no problem cutting down to 205.

I know you were born in Ohio. Do you still have family in the area who will be there at your fight in Columbus?
Yes, all my family and friends will be there.

There's another group of young guys in the Ultimate Fighter house right now. What advice would you give them, as an Ultimate Fighter alumnus who's had a successful UFC career?
Don't give up and try your hardest to make the top. Enjoy the ride.

Are there any fighters in particular you've tried to emulate, either in their fighting style in the cage or the way they conduct themselves outside it?
No, I go my own way and do my own thing.

Who do you think is the best pound-for-pound fighter in the world?
Georges St. Pierre.

How many fights do you have left on your UFC contract?
Five more to go after UFC 96.

Do you think about who you might fight after UFC 96?
No, I think one fight at a time.