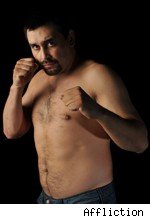 On Tuesday, it was revealed that the Russian mixed martial arts fighter Kirill Sidelnikov tested positive for the steroid Stanozolol after he lost to Paul Buentello at Affliction: Day of Reckoning in January.

On Wednesday I talked to Buentello about Sidelnikov's positive test and about his claim that he tested positive because he took the steroids accidentally through a nasal spray. I also asked Buentello how widespread he thinks steroids are in MMA, and when he expects to fight again.

Our interview is below.

How did you find out that Kirill tested positive?
I'm pretty well attuned in the MMA world, and I saw it on the Underground Forum.

What was your reaction?
My reaction was, Wow. If I would have lost it would be a different story, of course, but since I won I have mixed emotions. I wish he was more honest about it, but I guess I've just had a bad string of luck fighting Russians.

You're referring to Aleksander Emelianenko pulling out of the fight that you guys were scheduled to have last summer, when the California State Athletic Commission refused to sanction him at the last minute. Have you ever gotten a straight answer on what happened there?
Yeah, they told me. Everybody knows, but I don't want to say it on the record. But everybody knows the reason why. The truth is out there. I don't want to get the Commission mad at me for saying what they told me, but everybody knows.

I understand why you don't want to say, but Aleksander is fighting in other countries. Don't you think his opponents in other countries have a right to know why he isn't allowed to fight in California anymore?
Oh, totally. His opponents need to know. Everybody thinks boxing commissions are a bad thing for the sport, but they're a good thing for the sport. They're there to protect the fighters. The commissions only go to the borders of the United States. It would be nice if it was international.

Let's get back to Kirill. Do you lose respect for him as a competitor because of this positive steroid test?
No, I don't lose any respect. The respect starts and ends when you step into the ring. He stepped into that ring and he fought his heart out.

Kirill's promoters are claiming that the Stanozolol got into his system accidentally, through a nasal spray. Do you accept that explanation?
You never know. The way the commission controls everything, from taking Advil or Ibuprofen or a nasal spray, there's no telling what could give you a bad test. So that could be the case or it could not be the case. I'm not the one that has to defend him.

Kirill is closely associated with Fedor Emelianenko. They're training partners and friends, and Kirill is even called "Baby Fedor." Do you think this tarnishes Fedor Emelianenko at all?
No. I have great respect for their team, the Red Devil team, and their team will have to handle it together. It's the same way with my team, the American Kickboxing Academy. I think some people will look at Red Devil like, "Whoa, what's going on over there?" But Red Devil is a strong team, and I think they're going to handle it as a team.

I assume you took a drug test at the same time that Kirill did. Have you received the results of that test?
Yeah, I got my result. The joke we have is that I test positive for burrito eating, but no, my tests come clean. The way I look at it is, if I train hard enough, my results will show. I don't need any substance to get my results.

How widespread do you think performance-enhancing drugs are in MMA?
I don't know how widespread it is, but it's on a lot of people's minds. You've got to look at our sport, especially in the heavyweight division. We should have a cruiserweight division because we've got guys from 205 pounds to 265 pounds all in the same division. That's 60 pounds you have to deal with. We also have guys cutting from 200 pounds to 170 pounds. I think it's on a lot of people's minds that they need it to cut that weight, or to have the ability to keep bringing it hard. Boxing has more weight classes, with increments at seven pounds. I feel strongly that we should have more weight classes.

When will we see you fight again?
I'm looking for May or June, either with Affliction or Strikeforce, because I have a fight left with Strikeforce, and I have a fight left with Affliction. It's all about scheduling. I've been staying in shape, I've been keeping up with my cardio, and doing what I'm supposed to do, because my job is to get in that cage and fight. I had a great performance in my last fight so I want to keep that momentum.

I've heard both Tim Sylvia and Gegard Mousasi mentioned as potential opponents for you. Do you think either of them could be your next opponents?
Isn't Mousasi the one who's coming up from 185 to heavyweight?

Yeah.
I've looked at that fight. It's an interesting fight because he's making a huge move, and I think it would be a good fight, but not right now. It wouldn't do anything for me and there's no reason for me to fight him. I'm looking to fight the toughest fights out there. I don't want to fight some guy that's 185 and moves up to 250 pounds. If I beat him or if I don't beat him, it doesn't do anything for my career.

Are you happy with having contracts to fight with both Affliction and Strikeforce?
Oh, I love my position in the sport right now. I have two good companies I'm working with. Strikeforce definitely takes care of me and lets me out of my contract and lets me go fight with Affliction. And Affliction, with Tom Atencio, they really put the fighters first. You can see that by the pay scale and by what they do behind the scenes. They really, really put the fighters first. Strikeforce, they understand that a fighter needs to fight. They understand, that's our work. Scott Coker is a great man. I love my position right now.

Switching gears, I read that you've been training police officers in hand-to-hand combat. What's that like?
I'm always looking for something different. I have a lot of good friends who are police officers, and we're always talking about developing defensive positions for police officers. I wrote up all this paperwork, and even though I'm not a good writer and I'm not a good speller, the chief of police in Midland, Texas jumped all over it and brought me in for a four-day seminar. It was pretty neat. The officers got a lot out of it, and they're bringing me back in, I believe, two or three months to do SWAT week, and all the surrounding counties are bringing their SWAT teams in.

You seem like you want to use MMA to help people.
You're right. I've been showing these officers what they might see and how they can defend it. If a person is actively aggressive toward an officer, the officer can use these techniques to stop the guy in his tracks.

What else will you be working on before your next fight?
I'm just waiting, just training, and I'm excited about fighting for Strikeforce and Affliction, whoever gets me a fight first. And I've got my web site, PaulBuentello.com, where I have information about Dr. Scott Connelly and Progenex, which has really helped me out with my nutrition. Really, all I'm doing is having fun. I love this sport. When I'm not having fun anymore I'll slow down, but right now I'm still loving it and I can't wait until my next fight.