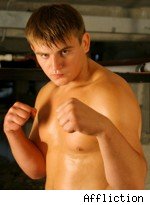 In January, the Russian MMA fighter Kirill Sidelnikov lost a fight with the American Paul Buentello at the Affliction: Day of Reckoning event in Anaheim. This week the California State Athletic Commission revealed that Sidelnikov tested positive for the steroid Stanazolol after the fight.

Even though the 20-year-old Sidelnikov isn't a big name in MMA, his positive test was big news in the MMA community, in part because Sidelnikov has a close relationship with the world's best MMA fighter, Fedor Emelianenko. Sidelnikov and Emelianenko train together, and Sidelnikov's nickname is "Baby Fedor."

Trying to quell the controversy surrounding Sidenlikov's positive test, on Wednesday his promoter, M-1 Global, released a statement saying that Sidelnikov took the steroids unknowingly, as a result of using a nasal spray given to him by a coach who was trying to help him recover from a broken nose.

M-1 Global's full statement is below.

Immediately after the company was notified, an internal investigation was launched. As a part of the investigation, M-1 Global officials spoke with Kirill and asked him to explain his position.

In preparation for his Affliction debut against Paul Buentello in January, Kirill spent some time training outside of the Imperial Team family in St. Petersburg. Kirill indicated that during that time away he began to experience complications from a broken nose that he had recently sustained.

Not wanting to miss any training time leading up to "Day of Reckoning," Kirill followed the advice of a coach not affiliated with M-1 who gave him a nose spray commonly used in Russia to help treat some of his symptoms. It is M-1's belief that the nose spray is what contained the Stanozol.

For those that are skeptical of this explanation, we believe Kirill's account is true based in large part to his physique. If he had been using large amounts of Stanozol on a regular basis, we believe that the frame of his upper body would have contained leaner muscle that had more definition.

While we do not believe the use of a nose spray provided Kirill with an unfair competitive advantage, we are obviously very disappointed in his lapse of judgment. Even though it was only a common nose spray that he used to treat an injury, an athlete must take full responsibility for what he puts into his system at all times. While we are not citing youth as an excuse, we feel we need to offer the public an explanation and we attribute the mistake in part to the fact that Kirill is just 20-years of age.

In spite of our disappointment, Kirill remains a part of the M-1 family and as such, he can continue to count on our support through this turbulent period. While we do not endorse his actions, we stand by him.

M-1 takes full responsibility for Kirill's actions and we respect the decision of the California State Athletic Commission. The organization would also like to make it clear that we do not condone the use of performance enhancing drugs of any kind and we'd like to hereby apologize to the MMA community for Kirill's indiscretion.

M-1 believes that Kirill is one of the top up-and-coming fighters of the sport and after he has served his punishment and is eligible to return, we hope that the public will give him a second chance to prove himself.