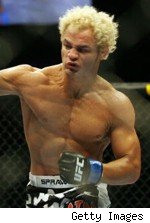 Josh Koscheck will fight for the fifth time in just over 10 months when he takes on Chris Wilson at UFC 98.

MMAMania.com is reporting that Koscheck-Wilson has been added to the UFC 98 card, which takes place May 24 in Las Vegas and is headlined by the heavyweight title unification bout of Frank Mir vs. Brock Lesnar. Koscheck is staying very busy; here's a look at his recent results:

UFC 98 hasn't been finalized, but it's expected to be one of the biggest cards in UFC history. Here's the UFC 98 card as it appears to be shaping up now: