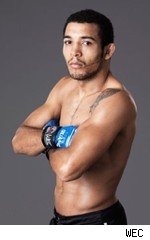 One of the most promising young featherweights in MMA won again Sunday, as Jose Aldo made short work of Chris Mickle with a first-round TKO at WEC 39.

Although Aldo is a Brazilian jiu jitsu black belt, nine of his 14 career wins have come by knockout or technical knockout, while only two have come by submission. So it was business as usual for Aldo that he beat Mickle without even going to the ground. Aldo hurt Mickle badly with a flying knee, threw a high kick and then pummeled Mickle with his fists until the referee stopped the fight. The whole thing was over in just a minute and a half.

The 22-year-old Aldo has shown off a brash demeanor in the past and has even claimed that he's the best pound-for-pound fighter in the world. But he came across as quiet and humble in the cage after beating Mickle, saying through his translator that he's just waiting for his shot at the featherweight title.

That title shot won't come right away, because the winner of Sunday night's title fight between Mike Brown and Leonard Garcia will take on Urijah Faber next. But if Aldo keeps winning, he'll get a title shot soon enough. He's now 14-1 in his MMA career, and he's gone 4-0 in the WEC, finishing all four opponents. He's for real.